Emerging onto Deck 6 of the Pont Aven a little later than usual, having slept too well, my first surprise of the morning was to find a Turtle dove, Streptopelia turtur, perched on the deck lighting.

It didn't hang around long enough for a photo. I've seen one or two on the ship before, flying in and out of the funnel but don't know whether they are resident or cadging lifts during migration. Whatever, it must be warm inside that enormous chimney.

I haven't done the crossing much in high summer so was hoping for a millpond of a sea with big Baleen whales visible, but it was windy and choppy with a fair swell and not looking promising. A shearwater skimmed the waves, I think possibly a Cory's in moult. 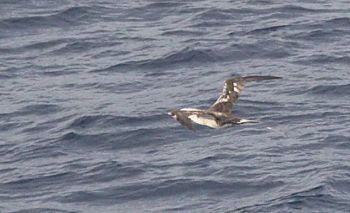 Another bird caught my eye but this time not the usual deep-sea wanderer but a Curlew! Numenius arquata, resolutely heading south. It was flying fairly high above the water at first  before (worringly) dropping to join the shearwater. 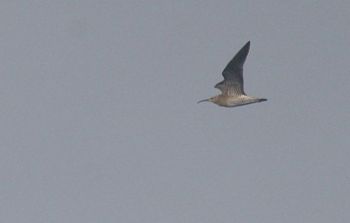 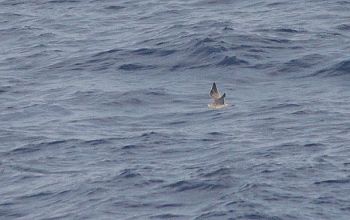 While I was transfixed by this unusual sight a tap on my shoulder alerted me to a whale blowing in the distance. Huge plumes of spray were shooting vertically and high but I couldn't glimpse the animal responsible and assume it was either, most likely a Fin whale, Balaenoptera physalus, or even, less likely but possibly, a Blue whale, Balaenoptera musculus, the biggest of all.

Strolling around the Marismas Blancas, a marshy area on the outskirts of Santander, a few weeks later we heard and saw a Curlew probing along the shoreline. I like to think it was "my" bird having safely made it to it's wintering quarters.