The dog and her handler, Joaquín Morantes, will be the first canine anti-poison team working in the Cantabrian mountains, the only Spanish autonomous community 'til now benefitting from such a measure being Andalucia. 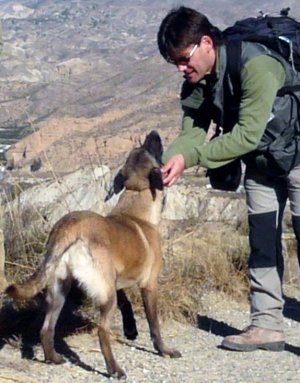 Down there in the south the dog team found 337 poisoned baits in just 83 outings. Poison, often Aldicarb or Carbofuran, is primarily laid, in the Cantabrian mountains and the Picos de Europa at least, as a method for protecting livestock by removing wolves but has repercussions all the way down through the food chain. Apart from Canis lupus signatus, among other carnivorous species killed by this illegal method are Cantabrian brown bears and Lammergeier, the latter's reintroduction programme to the Picos having been delayed precisely because of the dangers of the birds being poisoned.
Mira and Joaquín have already started work in the Palencian/Leonese side of the mountains and will next be heading to Asturias. The initiative is a Fapas project funded by the Spanish Ministry for the Environment.
Update
I've just found a video of Joaquín and Mira in action (albeit controlled somewhat). He certainly has his work cut out for him controlling the dog .....who must be stronger than she looks.