Although they've managed to modify thier own laws to enable the construction of an alpine ski resort if seen to be of financial benefit to the local community, they still haven't approved the relevant management laws of the Natural Park (Fuentes Carrionas) or even come up with any for the Regional Park (Picos de Europa). They're also still behind with declaring the required Special Areas of Conservation to comply with the EU's Natura 2000 network of protected areas.

Actually they're out of time as that lapsed in December 2010. Court case soon.

Another anomaly, as in previous springs the regional government has announced restricted access areas in the Natural Park due to the presence of bears. Click on map to enlarge.

This weekend, starting Friday the 29th of Apriil, there will be rock concerts and street theatre in the city of Palencia. The following weekend, Sunday the 8th of May, groups of photographers will walk three different routes from starting points in Leon, Palencia and Cantabria with the aim of selecting the best photos for uploading to the internet as a visual display of the biodiversity that the region currently offers. The organisers also hope to mount a travelling exhibition with the images. Again, click on the poster to enlarge. 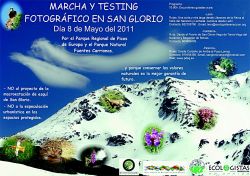 The idea comes from the photographic "testings" previously made by Biodiversidad Virtual in favour of other threatened areas such as Los Monegros in Aragon where the Gran Scala casino complex is now stalled. Images will include everything from insects and plantlife to landscapes, the whole threatened ecosystem of the mountains around San Glorio.