The chicks hatched in March and, so far, are doing well. If all goes to plan the birds will be moved to the Picos when they're between 90 and 120 days old, the stage when imprinting naturally occurs as they take in their surroundings. The Asturian government, with the backing of the Picos de Europa National Park, has officially asked for the birds to be translocated and is waiting for confirmation from the Aragonese government. 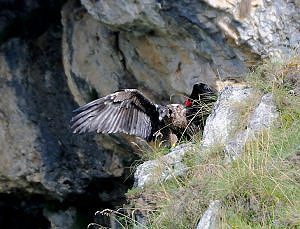 Meanwhile, another Lammergeier has been seen with Leoncia and Deva, apparently having flown of its own accord from the Pyrenees. The birds are expected to travel more this summer, roaming further afield before, hopefully, returning to their territory near Covadonga in the western Picos de Europa.