I tend not to take my camera when I go shopping. A warm mid-day this spring, however, has made me re-think that complacency because you never know what you may stumble upon while heading towards your trolley, sweaty coin at the ready.

In the cool shade of the underground carpark in Potes' new Lupa supermarket I spied what I first took to be a child's toy abandoned in the rack of trolleys. 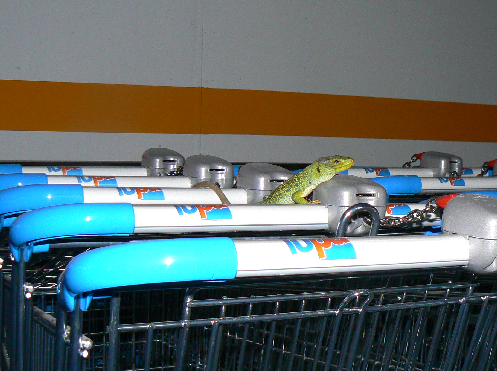 A stealthy, closer inspection revealed a perceptible throat movement as the lizard tried to hold its breath while hoping it hadn't been spotted (!) So, I dashed home for my camera and two hours later found him still there. This young male is not one of the largest specimens I've seen though none the less beautiful for that with his blue spots overlaid on his green flanks. As with many species, sexual dimorphism (or more specifically in this case dichromatism) lends the male a more colourful appearance. In this photo you can just see his serrated collar as well as his spotted side.

As to his taxonomy, I'm not sure whether he belongs to the nominate Timon lepidus lepidus, found in most of mainland Spain, or to the subspecies Timon lepidus ibericus, found in the north-west. Even taxonomists aren't quite clear on this and seeing as he (surprisingly) didn't show me his back teeth, I couldn't clinch it either, though his snout does look more pointed to me than the usually more rounded on lepidus lepidus. 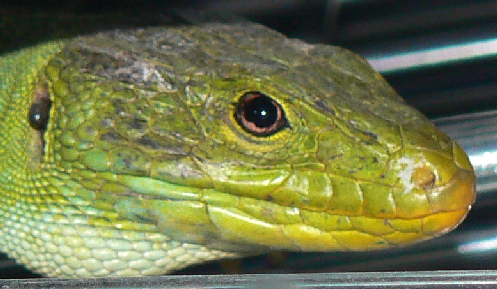 Deciding he was probably much safer back in the depths of the trolleys along with the scraps of lettuce, I left him to find his own way out. Hope he made it. 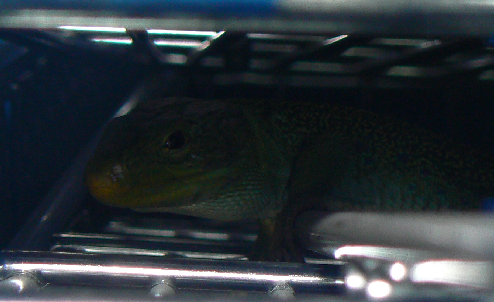