The first snows of the winter came early to the Picos with a generous smattering at the back end of September, this was followed by a wonderfull Indian summer throughout most of October. It was during the last days of October that the first real snow arrived with a 60cm dump falling to 800m. 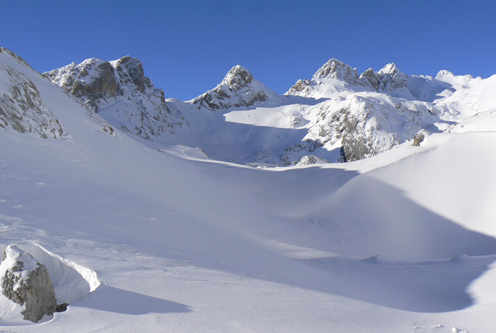 A breif and welcome weather window over the festive period allowed Helena, my first client, to ski some great conditions in fabulous sunshine, first up on the flanks of Pena Sagra and then a circuit from the cable car of Pico Padiorna. Here was a chance to try out my new toy I got for christmas a small strap on a helmet movie camera with dodgy results. I promise to get good with this gadget because hopefully it will mean a lot less writing on this blog, (That’s what you think. Ed) I'm not sure what I get first prize at, being untechy or academically lazy.

The following week was ski touring with a very fit lad, Hellley Henson Joe, named so because of the amount of helly henson gear he had accumulated as a result of sponsership deals for adventure racing and mountain marathon events. Fortunatley we were able to have fun under the wind in the deteriorating weather conditions. We were joined on wednesday evening by Sheena, Helen and Dave (see his trip report). Thursday saw us skiing in a blizzard off the top of Piedras Lenguas, decreasing wind speeds made it possible to get to 1900m under the Peña Labra ridge. Friday the 13th feb the weather finally cleared up and a settled high pressure entered the peninsular for the first time in 4 months. The consequent sunny weather made for intoxicating conditions, table top ski anywhere snow, clear blue skies, sun, sun, sun and no wind. 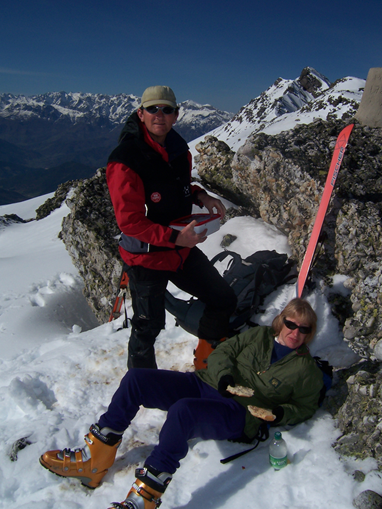 Tom Rye and I enjoyed a perfect week of afternoon skiing (he brought his work with him, and chose to work mornings). I'm not sure that I should point you in the direction of his subsequent trip report, but there you are! (I’ve lost count of the number of his visits to us).

During the first week of March, the area was hit by a ferocious 2 day storm with snow falling down to 700m and as the wind abated on the 3rd day the temperatures rose with steady snow falling above 2,000m. Massive avalanche activity was recorded all over the Picos, first wind slabs, particularly above 1,800m and later wet slabs at lower altitudes. Hard freezes quickly stabalized the pack, and we were ready for a group of Irish winter walkers. 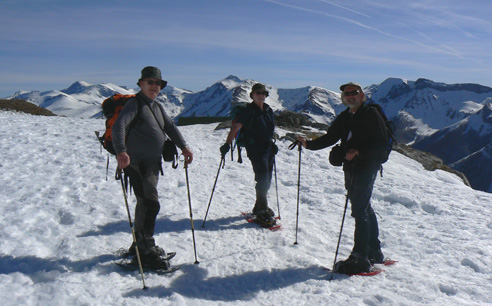 A group of friends that normally go to Scotland for their winter meet decided to come to the Picos for a change and hopefully more reliable conditions. The most experienced member of the group Paddy O'Leary (76 years young and not the eldest, or so one of them claimed) had skied with me some 10 years before. The craik for the entire week was excellent. Their agenda was to walk independently for the first 4 to 5 days in the cordillera and then to come out with me in the Picos for a couple of days. It was decided that there first a day out with me would be a very gentle day on the plateau above the cable car trying out the snow shoes, (its amazing some peoples resistance to the new raquets, no doubt scarred by experiencing earlier models). On the second day Paddy, some others of the group and myself went to experience some extreem snowshoeing - we were all impressed by the performance of the shoes. Definately the highlight of the week, watching with Mairtin Liverpool thrashing Manchester United and then driving to Santander to watch Ireland.beat Scotland on their way to winning the 6 nations.

My next day out was with Bridget, Kath and Mina skiing. We were joined for the rest of the week by a guy who described himself as an extreemly fit, excellent skier. Well we guesed he wasn't from Blighty. Greg turned out to be Canadian, and didn't dissapoint, Ok he was fit and took loads of.photos and gave me some lessons on how to use my new sports cam. (Greg’s trip report here).The higher north faces remained rock hard and the southerly aspects flatteringly easy to ski, so we skied most of the week low down or high on south faces, in a blaze of glorious sunshine. Most memorable moment of the week was Mina falling through a cornice. Its difficult to know if she has learnt from her lucky escape, time will only tell. Watch this space next winter. 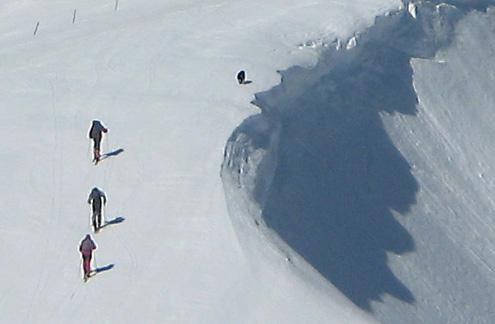 The following week I was joined by Lorraine. Another regular companion, Lorraine is firstly a United fan and secondly a ski lady of leisure (profesional ski bum), working as a speech therapist 8 to 9 months a year, April/May to Nov/ Dec, and skiing around different resorts in the Alps and the Rockies for the rest of the year. Needless to say nothing fazes her on the descents and although takes her time going up she is allways in complete control. We were blessed with perfect conditions throughout the week, and I managed to ski what were for me 5 firsts or variants, the highlight being the south facing gully off the summit of Peña Prieta. (Looking forward to Feb. ’10 Lorraine!) 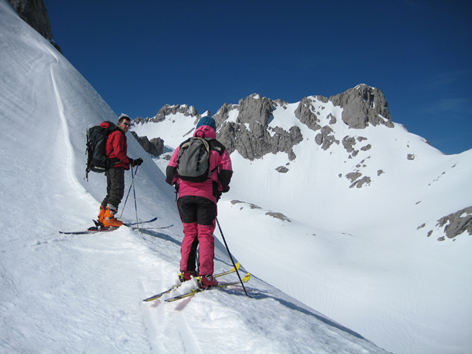 Lorraines week we took a visit to the kit shop in Santander, as i was picking up my parents from the airport. There was a sale on, and I bought 2 pairs of small Fritchi explores for Liv and Isaac to go on some 40 euro skis I'd picked up in decathlon sales over the previous 2 years. I was a bit apprehensive as to how the kids or the new equipment would perform. Both of them would be skiing in boots too big for them and Isaac would be skiing on a ski over twice as long as anything he'd been on before.Needless to say they came through with flying colours. Flying being the apropiate word, why is it Kids insist on jumping before they can ski or ride a bike?

During the 1st week of April, 2 ladies that were born during the war came to do some level one walking. A round trip from the house convinced me that they were fit and game enough to try out the snowshoes. Up the Teleférico we went where they were amazed at the simplicity of the tools that enabled us to float over the meters deep snow in an environment they never really dared to dream that they maybe actually able to venture into. It was another demonstration of how fantastically democratic the new raquets are, opening up the winter landscapes to nearly all who care to venture.

The following week brought us Tapas Tours, a group of mates of PP's from the Bowline climbing club who came to walk, run, snowshoe and enjoy tapas in the sun, which they were fortunate enough to do everyday of the week.

At the end of the month I took a Dutch family to the snow, so the raquets have been used by three generations this winter. The first day we traversed and descended to the wee hoyo at the top of the Jenduda Gulley where we enjoyed a sheltered lunch and Ferk ( for that was his name ), the 11 year old lad dug a snow hole. Day 2 it was decided that we were a strong enough party to make a linear descent down the snows of Aliva. The plan was for me to leave early and drive up to the snow line in Aliva and then walk to the top station and meet the family with Mina, dogs are allways good for childrens morale. The weather was kind to us with a cooling blanket of mist enveloping us for the short climb to the ridge above the cable car, lifting miraculously on arrival to reveal the glorious vistas. Off the snow following the infant meandering rio Nevandi, the high pastures were swaythed in a plethora of Narcissi Asturiensis, tiny alpine daffodils.

May Bank holiday weekend we hosted a summit for the people of the Iberianature forum website. Part of the organised activities was the walk described above. Only 3 people decided to opt for this activity, which I led with Isaac on our skis, Patrick, Pablo and Bob on snowshoes. It was Isaacs first proper ski tour and was of course full of the normal 8 year old's contradictions, ie tired going up, it seemed to take an age to make the last 30m and then on the descent "that was brill can I go back up and do it again?" It did take him a while to realise that we dont have to climb back up to get more descent, we just keep going down, and yes I am proud.definatley. The highlight of the winter so far.

Only managed one day of note since, in the cordillera with Mina we managed 900+ metres of descent, a traverse of the Pico Las Cuartas/Lomas ridge above the threatend Valle de Lechada. Didn't see a bear and Mina managed not to fall through the cornices.

Oh, and Stephen Venables passed through, borrowed some gear and skied off Pico Tesorero in early June!