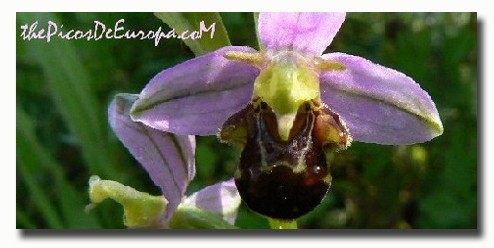 It's not only pollinating insects that are attracted to the Picos de Europa in spring by the array of colourful, ingeniously developed orchids growing here. Botanists from all over the world come to study the hay meadow habitats that contribute to making the Picos de Europa so special. N.B. Groups are advised not to walk through the middle of hay meadows when these are about to be cut. Please keep to the edges so as not to flatten the crop!

From the first exhuberant, early-flowering displays of Giant orchids in March through to the more diminutively demure Autumn lady's tresses in September, orchids can be found, however, not only in the most commonly-known months of May and June, nor only in the hay meadows. The different soil types around the Picos, from alcaline calcareous to acid, provide the ideal growing media for a variety of orchid species. The range of altitudes from about 100m - 2,000m+ further explains why around 50 terrestrial orchid species have been recorded so far in this compact mountain range.

Following is an alphabetical list (common English names) of the Orchidaceae species that I've seen. Delving further you'll find descriptions, photos, scientific and common English and Spanish names of each, when they exist. In an effort to avoid the taxonomic jungle and to give the latest, generally accepted scientific names, I have followed Flora Ibérica, Castroviejo, S. (2005), Royal Botanical Gardens (CSIC), Madrid.