A carefully crafted route was designed for Sarah, Andrew and their four children aged between 10-15, all experienced hill-walkers wanting an adventure. Mountain hut accommodation was booked ahead to enable a series of bad weather alternatives. Here's their guide Mike's account of the trek along with photos by the family.

The family had opted to use local transport so caught the bus from Bilbao to Santander then changed for the bus to Espinama where Lisa and I met them the following morning. Following a hearty breakfast, and once the boys had been dragged away from the marvels of the toaster, we made the five minute transfer up the road to the cable car at Fuente De where a quick rearrangement of a certain rucksack was necessary, removing twenty T-shirts to allow room for the packed lunches. 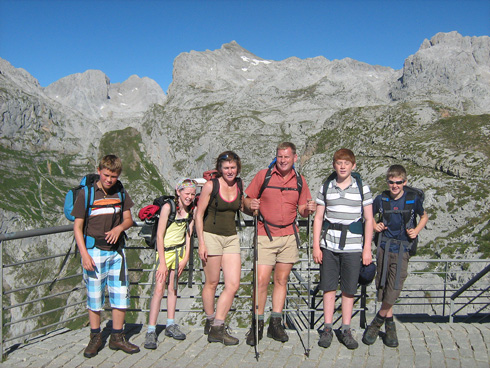 Stepping out of the cable car into bright sunshine at 1,800m, it was ominously warm. Almost immediately the boys were attacking small scrambles along our route. A slow ascent up the oven-like Canal de San Luis did nothing to dent the group's moral. We branched south about 250m from the summit, scrambling across the lunar slabs of the karst up to the south-east ridge of Pico Padiorna. 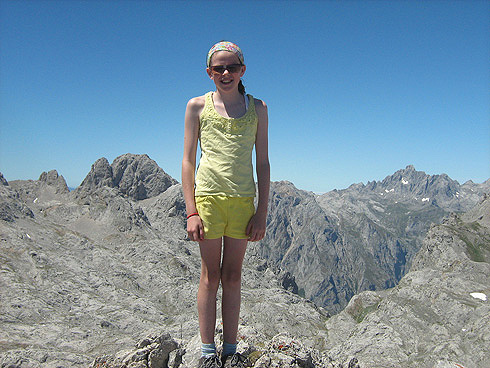 A series of scrambles with fantastic exposure down the huge south walls of the peak sweeping to the magnificent Vega de Liordes culminated in a wonderful chimney to the summit and lunch. 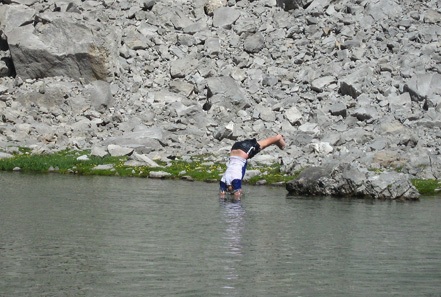 Our afternoon was rewarded with a well-deserved dip in a "secret" mountain tarn. Herds of rebeco, a Cantabrian chamois or Isard, kept the interest high until our first glimpse of the Jermoso hut. 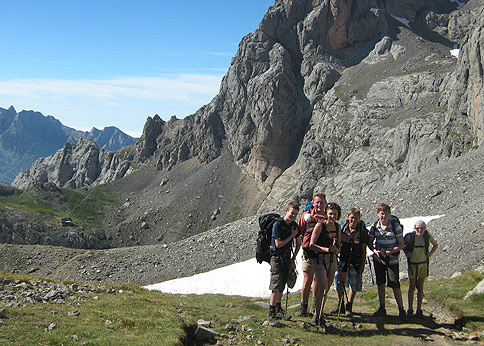 Fantastic food, delicious draught beer, romping rebecos, no wonder the Jermoso is one of the most popular huts in the Picos. The lads decided to bivvy out on the ridge above the hut for a first ever experience, and survived.

Water, water! Our first stop had to be the spring 50m below the hut. We scavenged extra empty bottles from the warden for the long dry trek to the roof of the Picos. 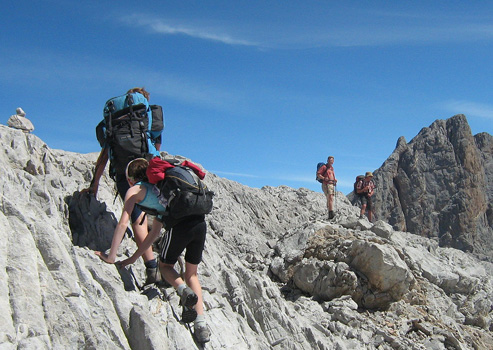 A not typical Spanish early start meant our first 100m were climbed in the relative cool of the shade. On gaining the ridge we reunited with the sun. A vague undulating path across the scree and some tricky snow patches brought us to the sharp scramble to the col. This brought fine views of our day's objective, the Horcados Rojos, via a long scrambly ramble across the limestone past the Cabaña Veronica, the 2,5 km's taking us 3 hours. 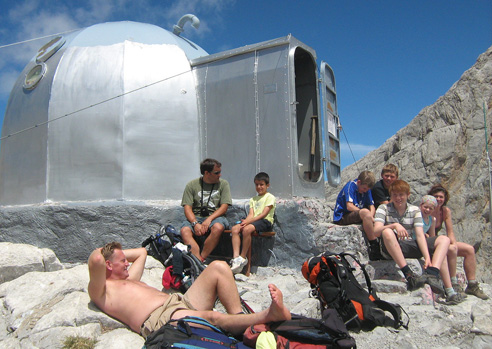 A swift descent from the summit on good paths and tracks took us swiftly to the alpine pastures of Aliva. Passing above the red-roofed Chalet Real (Royal Chalet) we were soon in sight of our "hotel" and its refreshing bar. Support met us here with supplies for the next days. 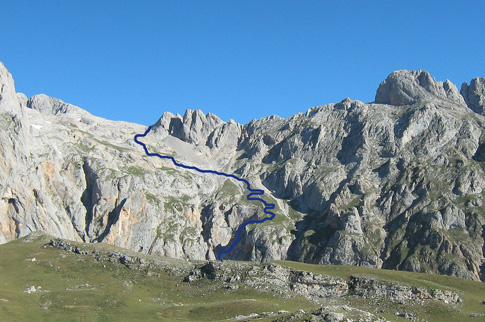 A big day: A gentle amble past the Chalet Real and awkward traverse under the huge walls of Peña Vieja's east face we soon gained the notorious Canal de Vidrios. A steep, rubble-filled, crumbling, schisty dark Mordor of hell gully. 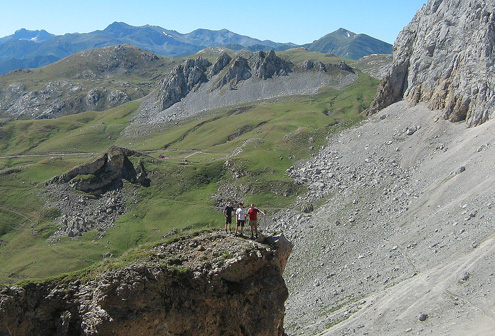 Moving carefully together we were soon panting for a well-earned rest on the hacked out ledge. Great views were just rewards for our early morning efforts. Ahead though was a long haul up the old miners track that switches back and forth up the long-defunct cog rail workings. Eventually we made the crags and screes that would take us to the ridge and lunch.

Our afternoon was an exercise in total concentration, crossing the crumbling snow patches of the high valley before a short scramble brought us to the col and the first, inspiring view of the south face of Naranjo de Bulnes, the most iconic peak of the Picos de Europa. 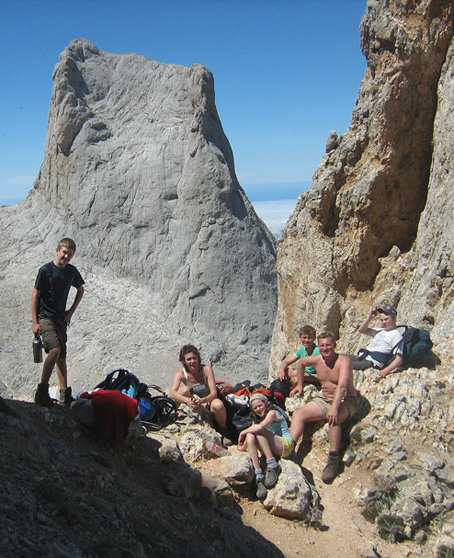 For two hours we marvelled at, first the south face, then the east and finally the dark north face from a snow chocked gully before finally emerging to witness the magnificent west face glowing in the afternoon sun. 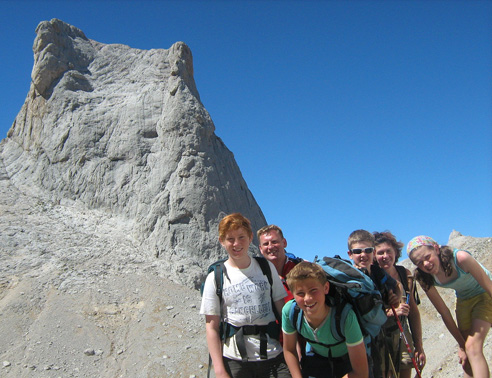 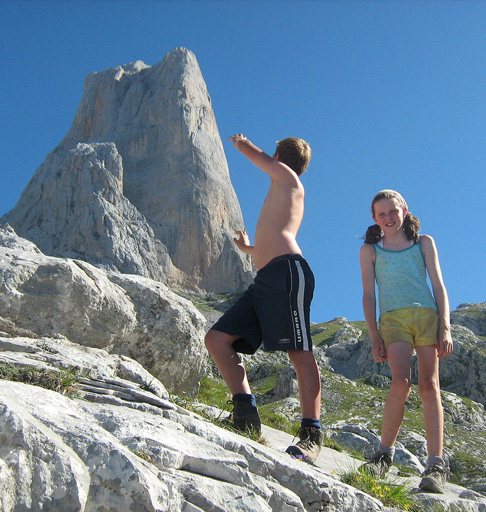 Replenished from the Urriello spring and unleashed from the arduous focussing on karstic ground the gang descended rapidly down the main Urriello donkey track. Stopping for a rest at the Puerto Trenosa for one last photo shoot of the ever-enigmatic Naranjo we plunged down into the "beyu" (Asturian mountain mist) that cloaked the Terenosa hay meadows, arriving at the newly renovated Trenosa hut. 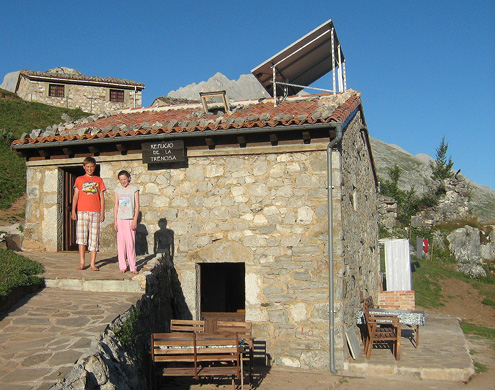 Really great food, a comfy cosy dorm and, most unusually, a shower! O.K. it was a little temperamental, but still it was a shower.

An easy morning stroll took us first down then up to the mountain village of Sotres, bursting with people and anticipation for the big fiesta the following day. Held every five years (ones ending with 5 or 0) at the top of the mountain Pico San Carlos, the fiesta del Sagrado Corazón (Sacred Heart) coincided with our peak for the final day. With full stomachs we slowly pulled ourselves up through the idyllic hay meadows of Sotres. 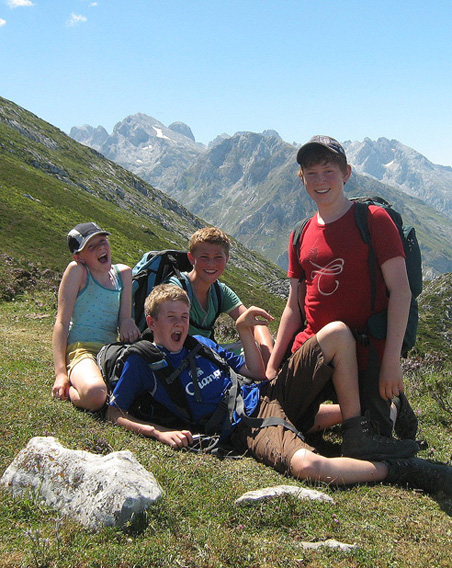 With lots of rests and water stops the meadows gave way to heathers and gorse and, rewardingly, the ridge offering us views of Macondiu and the inner sanctuaries of the eastern, Ándara massif. 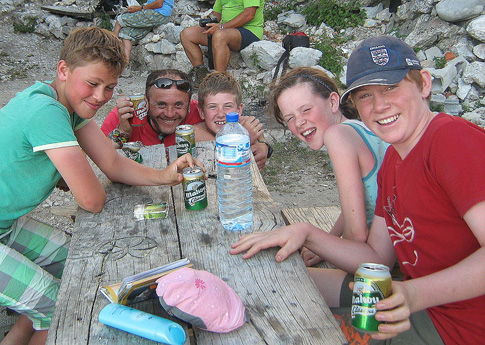 Our plan was to rest up for a few hours and then have an hour's reccy of the troglodyte village, at 100m or so from the hut. With kids sufficiently demotivated Sarah, Andrew and myself scrambled up from the hut in search of mining archeology and water. Whilst away the hut was transforming with hordes of pilgrims arriving, most passing on but nearly all pausing for a refresher. A real sense of occasion was building with loud pipes being played and traditional costumes displayed. 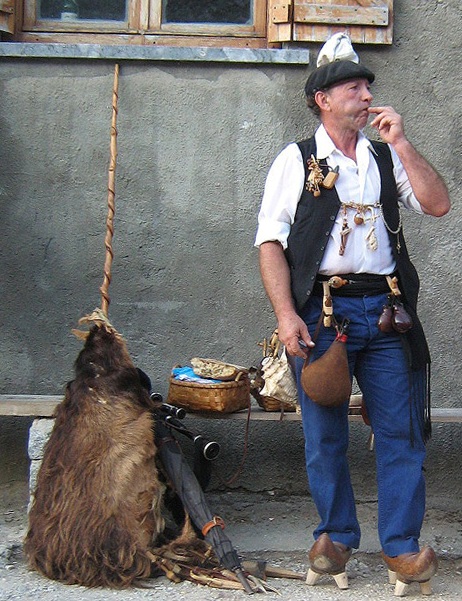 After a hot and stuffy night we were treated to bacon butties, the hut warden Ruben having come round to my way of thinking what's good for breakfast. Pleasantly we were in the mist to start, our first break from the sun. We were soon walking through the encampments of the fiesta folk, scores of 4x4's, marquees, gazebos in the mist, a totally surreal experience. 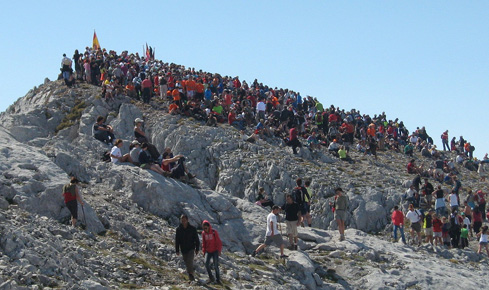 The light was brightening all the while and a few metres above the top tent we popped above the cloud, sharp dazzling peaks all around, a mar de nubes (literally, sea of clouds) to the north and a crocodile procession on the track above us. By skirting and traversing to the south we were able to walk to the Col de San Carlos on our own. 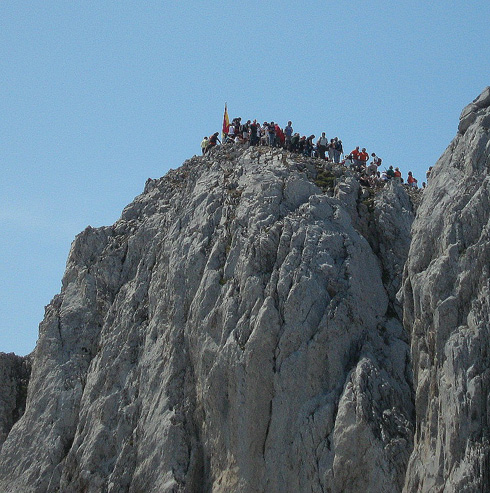 The summit of San Carlos was impossible to reach, well at least not safely or without being rude. Open-air mass on the mountain was well-attended by over 1,000 people. We took our lunch perched between the col and the summit above the 100m drop down into the gully, a constant procession of pilgrims passing to and fro from the mass keeping us well entertained.Our descent took us away from the throng down through the San Carlos gully plunging back into the clouds and out of the sun. The deeper we went the wetter it got, we were fairly flying by the time we hit the woods. The flat tarmac road in the valley bottom came as a welcome relief after a furious 2,000m of rapid descent.

Following their 5 day trek across the Picos the family completed their adventure holiday with a morning's canyoning in the Desfiladero de la Hermida before hitting the beach and campsite at San Vicente de la Barquera for some surf. 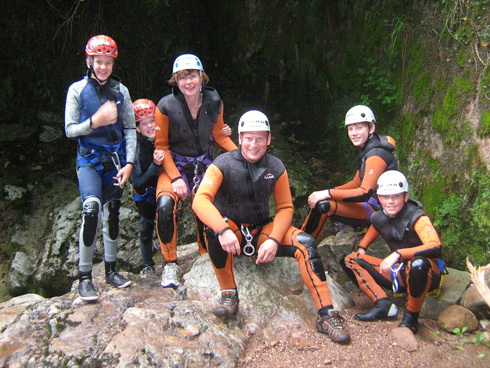 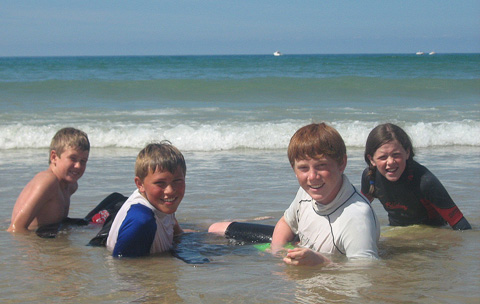