With a maximum wingspan of 135mm the Death's head Hawkmoth, Acherontia atropos, is one of the largest European moths, second only in size to the Giant peacock moth.

Its name comes from the patterning on the thorax that resembles a skull. This specimen came to rest on a beam by the ceiling in our sitting room. (Click on any of the images to enlarge them).

The larvae feed on plants of the Solanaceae family, particularly potato. Adults enter beehives by emitting a pheromone similar to the smell of the honey bees and gain access to the honey. 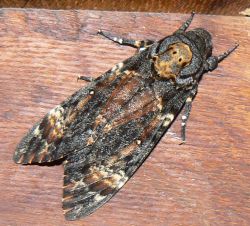 Around the Picos the Death's head Hawkmoth fly in August/September although in warmer parts of Spain and southern Europe they become bivoltine and also fly in spring. The mottled design is ideal for camouflage among dying leaves or on the bark of trees. (I've previously found an adult moth on a tomato plant).

When alarmed Acherontia atropos can let out a high-pitched squeek and the abdomen (not shown here) becomes brighter. I didn't put this one to the test. 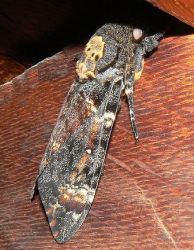