The weather forecast wasn't looking good for any wildlife-watching anywhere within reachable distance (which is actually quite far with Teresa driving) so we decided that if it was going to be wet it may as well be warm too. Instead of wolves in Zamora we headed further south to Extremadura for bustards and cranes for me and dragonflies and moths for T.
We drove through heavy showers to the Laguna de La Nava where as much as I tried to make a goose a crane, the Anatidae won. 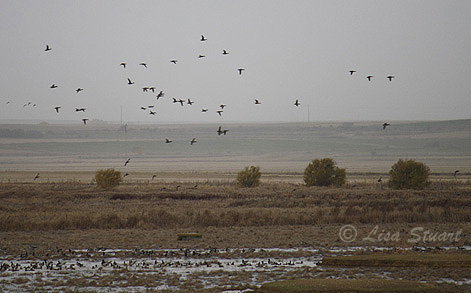 From the hide for the disabled (recommended for the best views) we saw huge flocks of Greylag geese, a fair number of White storks, a few Marsh harriers and heard Cetti's warbler. T also spotted a brave lone dragonfly perched on the wooden entrance rail. We made the campsite at Monfrague with just enough light left to erect the tent, forty three Red kites later, by which time the rain had eased to occasional light showers. 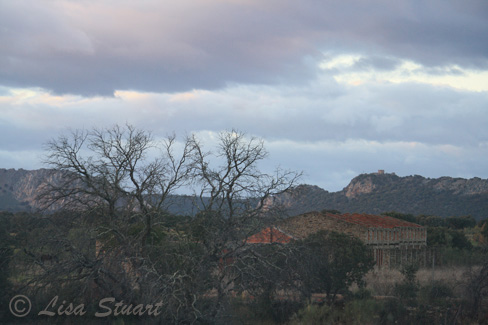 Morning brought the promised Azure-winged magpies as well as another favourite of mine, singing Spotless starlings. Driving into Monfragüe National Park, through ripped-out eucalyptus plantations replaced by young indigenous oaks, we made the obligatory stop at Peña Falcón, the iconic (and disappointingly just about the only) peak of the area where a solitary Black vulture, Aegypius monachus, obliged us with its presence among the ever-present Griffons. 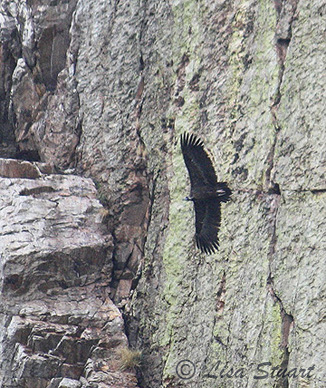 I'd seen one once in Liebana among a flock of Gyps fulvus and recognised the dark air-born plank of a bird though this was the first time I´d had a good look at its prominently pale legs.
Continuing south over the Tajo and through Torrejon el Rubio we visited a small, reed-fringed reservoir having decided to avoid any large bodies of water with inaccesibly steep banks, hoping for closer views of water fowl and late-autumn invertebrate life. 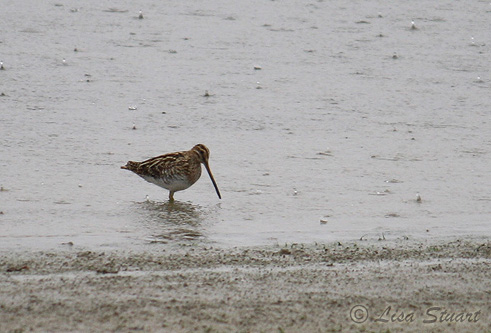 While T checked out the area around the bridge I scanned the main channel where water flowed in. Little egrets, snipe, lapwing, otter......Otter!!? While I watched it hunt in the water another appeared slipping out of the reeds. My first ever otter sighting had doubled in numbers to a mother and cub. 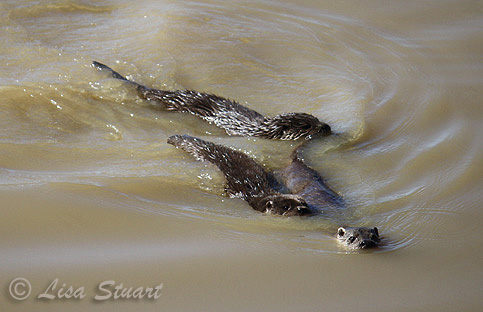 Enthusiasm undampened by the drizzle, we watched them swim until they disappeared from view. We returned to the dry and warm of the car to head to Caceres for supplies, our heads full of otters. What do you call a female otter? Bitch just didn't seem right, but it is. Luckily we were inside the supermarket when the weather turned torrential. The locals dashing in seemed rather under-equipped for the unusual inclemency.
Back to business we had a tip off from Teresa's mate John on where to look for feeding cranes. Slowly trawling the dehesa land between Monroy and Torrejon while at the same time keeping an eye on the tree canopies for Black-shouldered kites my eyes were beginning to glaze over when we turned up trumps. 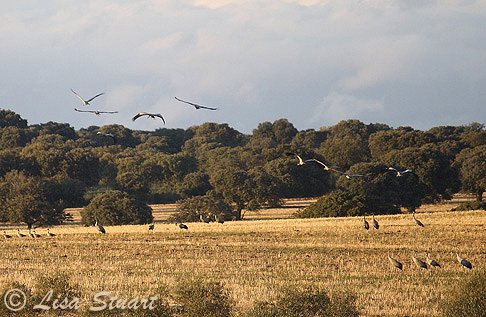 To our left a small group of Grus grus in the golden light of the late afternoon. It was only on jumping out of the car that T noticed a much bigger group further up the field feeding alongside some Greylag geese. No Lisa, not Great bustards. Satisfied somewhat it was time to make our way to canvas home to dream of otters.
I was still on my first coffee of the morning when T brought me a present. When an entomologist says close your eyes and open your hand who isn't going to feel a little apprehensive? Relieved to feel the plastic pot I opened my eyes to a gorgeous little tree frog. 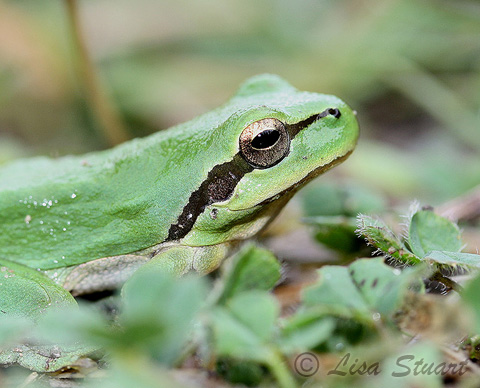 I'd been vaguely looking for them having been told they were here but must admit had been looking for a slightly larger amphibian. Still, small is beautiful. I carried on with my routine morning photo shoot of Azure-winged magpies, and a surprise Hoopoe, while T scoured the toilet block and neighbouring chalets for moths. On receiving her second present of the day I was much happier for it to be in a pot. One of two Rhinoceros beetles that she'd found (now identified as Copris hispanus, a similar Dung beetle but with grooved lines running the length of the elytra ). 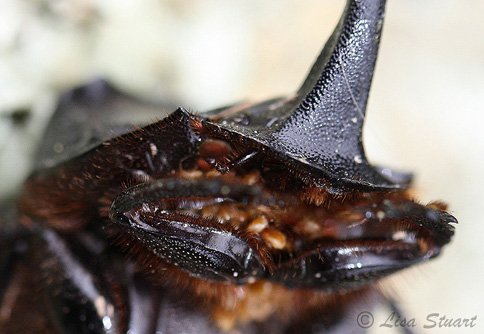 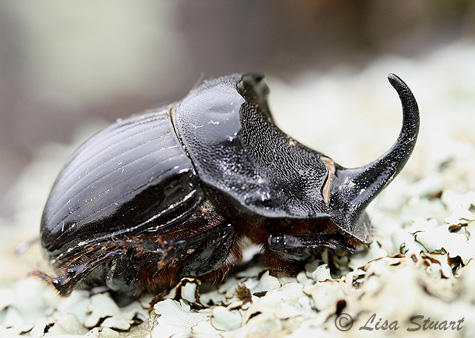 Leaving the campsite for our next day's excursion we were drawn back to what were now "our" otters. And what a treat they gave us, a real otter-fest. The mother emerged from their holt among the reeds followed by first one cub, then another! The three swam across the channel to emerge onto the far bank. 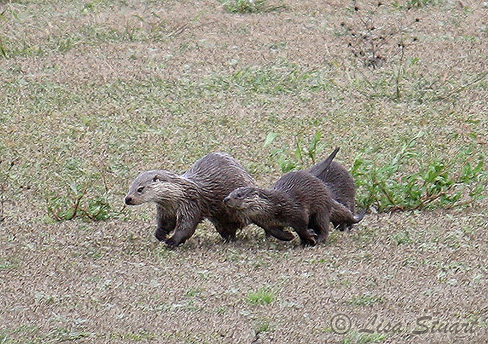 Gambolling along the spit they chased away a competing Little egret before returning to the water and swimming towards the main body of the reservoir, followed by a very excited otter-watcher. 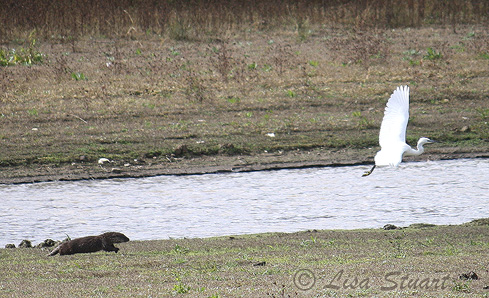 Creeping carefully low among the vegetation near the water's edge I found the cubs playing on a small rocky promontory. 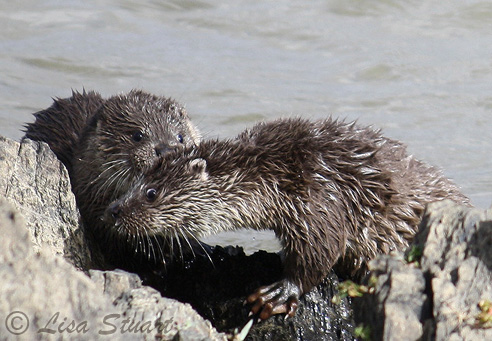 Mum was concentrating on feeding her playful brood, bringing fish and crayfish and calling every now and then. 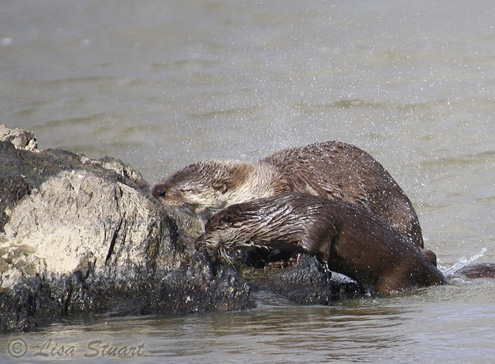 T caught up with me after having had her own otter experience by the old bridge, a single adult Lutra lutra that we assume must have been the dog. 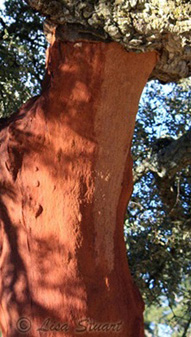 He had his own holt there, a multitude of spraints and crayfish remains in its vicinity. European dog otters maintain large territories, presumably because they eat a lot of fish and crustaceans etc. but will share territory with a bitch.

I was surprised at how vocal our family of three was, and how unconcerned the mother was by our proximity. She regularly stared in our direction before apparently deciding we were not a threat and continuing her hunt for food in the deeper waters of the now choppy reservoir. In total we watched them for around three hours before dragging ourselves away for a scour of the plains around Trujillo for bustards.

After a couple of hours every stone and bush appeared to be one. I can't think of a better analogy than the needle in a haystack but at least the haystack gave us the white underwing flashes of a couple of Black-bellied sandgrouse taking flight, a juvenile Hen harrier and lots of larks. 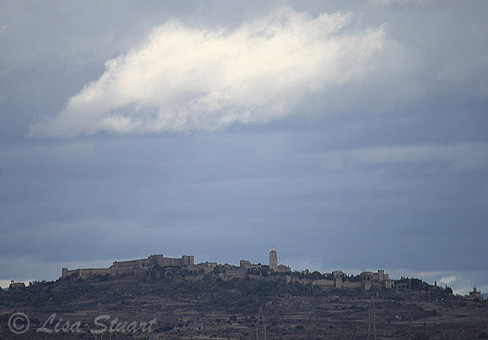 By day four the weather had improved so much that T drove to Torrejon el Rubio to look for dragonflies on what turned out to be an extremely elusive body of water that she had visited years before. We did see, however, great views of a Hoopoe fishing about a dry-stone wall with it's curved probe of a bill. 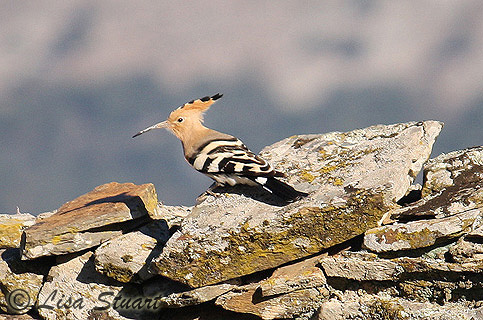 Back towards Monroy to re-find the Common cranes of a couple of days ago a Black, or Cinereous, vulture flew over us. Crossing the Rio Almonte I spied an otter dive into the water. I was, by now, expecting to see them everywhere. We dashed down for a closer look past Crag martins and flushing a pair of startled noisy sandpipers (possibly Green). What could have been a Two-tailed pasha, but which will just have to remain a large, dark butterfly, also skimmed past me. The otter didn't reappear which was just as well because my camera battery had just died.

We'd been commandeering the washing room on the campsite every evening to re-charge camera batteries while writing up notes with a bottle or two. Somehow mine hadn't fully charged. An early lunch in an amenable bar was called for and found in Madrigalejo. Not only the nearby rice paddies but the town itself was evidently crane country. As we approached the hostal/restaurant the air was alive with the screeching honks of flocks moving around. Battery recharged and tummies full of bocadillos de tortilla de bacon y queso it was a relief to get back outside, leave the frustration and follow the birds. Whether in our car hide or on foot we tried to creep up slowly and quietly but the flat lands with little cover made it impossible to get within a decent distance. 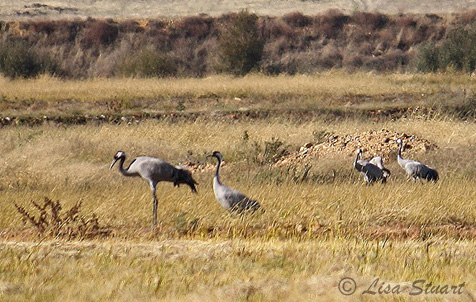 We were finally thwarted good and proper by a fallen tree that Hercules could have moved and we couldn't but at least it meant we were still there at roosting time to witness hundreds of cranes taking to the air, calling it a day... loudly. 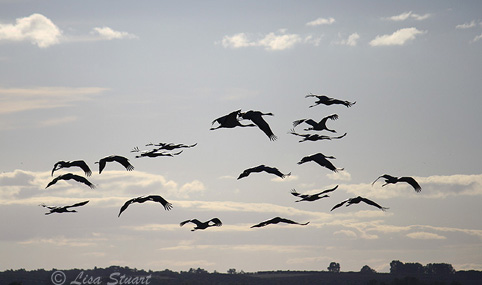 One last creep the length of a track beside the rice and I spotted a bright red bird in the bushes on my side. Not a robin and something I'd never seen before, a Red avadavat, Amandava amandava, an exotic Asian species that has recently made its home in certain parts of Iberia. 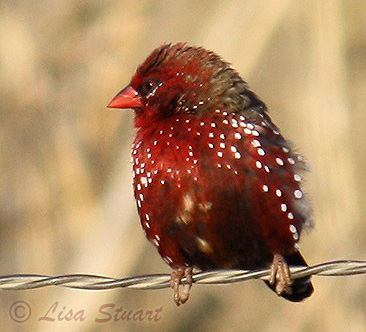 An autumn-breeding bird he was sporting his most colourful plumage. 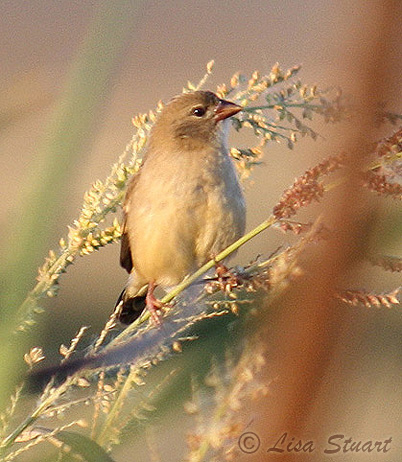 The flock was moving around the bushes alongside another of Waxbills. The Vegas de Madrigalejo also gave us Marsh harriers, a beautiful male Hen harrier, Hoopoes galore, Fan-tailed warbler and a Little grebe paddling about an irrigation ditch. 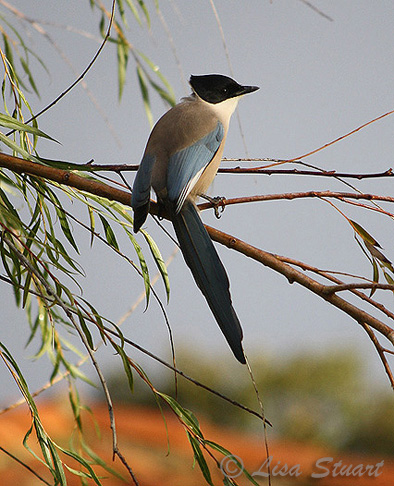 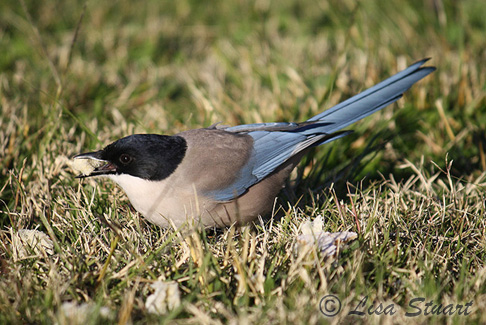 Our last morning dawned and we couldn't possibly leave without going to say goodbye to our otters. We were joined by another fan, pausing during his deliveries of restaurant supplies to enjoy the "nutrias", as mother and cubs frolicked in the murky waters just yards from us on the bridge. 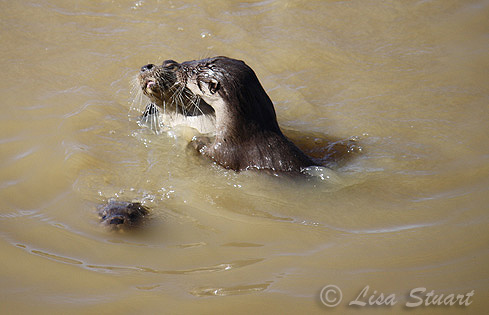 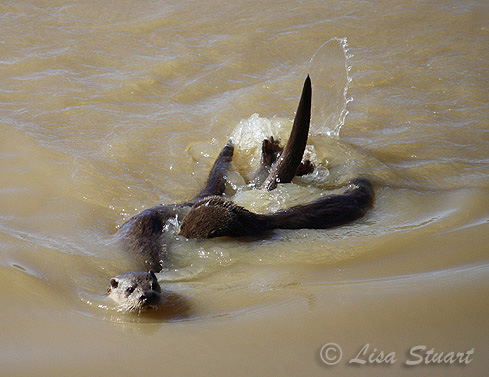 When dispersal time comes we hope the young ones avoid the road. The male that day was fishing the far end of the embalse, breaching and diving dolphin-like while T stumbled across an amazing red-eyed Praying mantis. I've since read that the eyes of Mantis religiosa can darken in poor light conditions. The Red kite count on the way home was completely scuppered by a large number in a field next to the motorway, now into Castile-Leon. We took the next turning off and followed a track towards them, an ominously overpowering smell penetrating the car. Windows now firmly shut there was no sign of a carcass. As we braved the smell to take photos a tractor appeared from below, drove past and stopped beyond us before entering the field, a sign on its side proclaiming its contents of dead animals not for anyone's consumption, 'cept for kites. 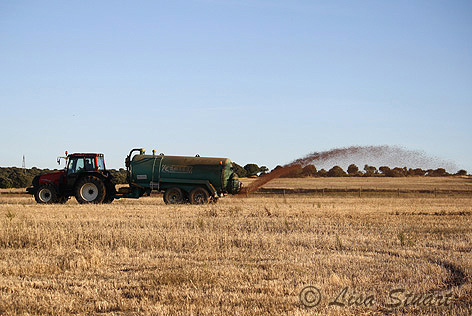 The driver was curious (and curiously, chewing a ring-pull from a can) because apparently they don't get strangers around those parts. I wonder what he thought about us?