Have you managed to get any climbing or skiing done this season? Did you scale your favourite peak or conquer a new one before the long slog back to a beer and a hot meal? Or was it the draw of the slopes, queuing for the lifts, paying a fortune for a ham toasty or just wondering if that camouflage-clad speedster roaring up behind you really had any control over his snowboard? 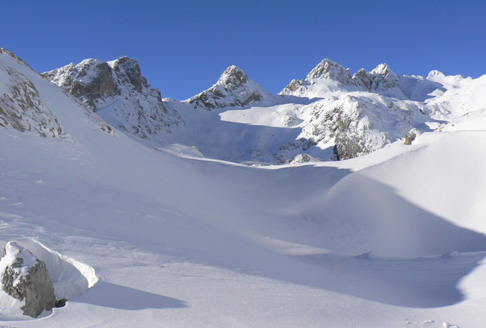 You could of course combine the two and experience the off-piste solitude of the Spanish mountains skiing up the slopes as well as down.

Mike Stuart has spent the last seventeen years guiding small groups ski-mountaineering in the picturesque Picos De Europa, on the Atlantic coast of Spain. His base is the seven bedroomed Casa Gustavo, overlooking the village of Potes, surrounded by snow covered hills. Ably run by Lisa, Mike’s wife, plus a couple of dogs, cats and children, the house has all home comforts from spacious twin bedrooms to a hearty three course dinner. Add in breakfast and a packed lunch for the hills and you will never go hungry.

I flew to Santander where myself and the two other guests were met by Mike. This was a really nice touch because it meant no car hire or fiddly bus journeys. Mike would appear to be quite flexible on dates as people came and went through the week but there were never more than four of us out at any time.

Equipment hire comes as part of the package and I was fitted out with boots and skis. The skis are the same as for downhill whilst the boots are similar but have more movement in the ankle. Everything else is the same that you would take for walking in such conditions.

For those of you who have never been to the Picos it is indeed a beautiful place. It is as far from the Mediterranean coast as it is possible to get both geographically and socially and has yet to be discovered by the hoards. Except for the weekend we had the slopes to ourselves, the snow was pristine and in most places completely undisturbed. 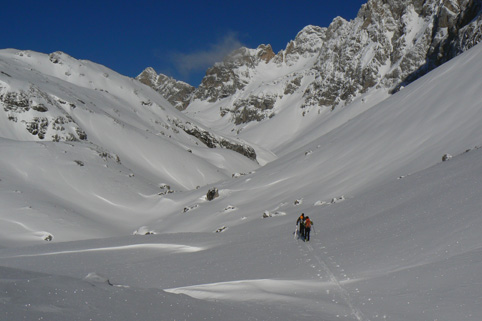 In order to ascend you put a strip of skin onto the base of your ski. Originally seal, the skins are now synthetic and stick to the bottom of the ski with surprising ease. They take no more time to fix than a pair of crampons and you are away. Unlike walking you do not sink into the snow but skate across, however the technique did not come easily to me and I had to work hard. The angle of slope you can ascend is probably a blue run boarding on black. When finally the skins can no longer hold you it is simply a case of swapping skis for crampons, strapping the skis to your rucksack and ski touring then becomes ski mountaineering.

Day one was a bit of an eye opener. I had not been on a pair of skis for over a year and I wore a cross country pair last century. It did not help that my companions were much more experienced and the weather was atrocious. Actually the lack of visibility probably helped on the descent because if I had been able to see the angle of the slope I would have been even more nervous than I was.

The next day dawned with beautiful blue skies and a sun/snow combination that called for factor fifty. After a full continental breakfast we piled into Mikes land rover and drove up to the snow line on Los Puertos De Aliva. . From there it was an amazing tour of peaks up to Canal de San Luis which once scaled meant a long off-piste ski across every conceivable snow state. I think we saw two other people all day and they were conservationists looking for brown bears. Lunch was large wedges of crusty bread with cheese and Spanish sausage whilst sat in the snow marvelling at the mountainous landscape surrounding us. Mike led with complete confidence and was even able to prise some acceptable technique from my haphazard skiing.

Saturday was more of the same blue skies, sun and peaks but with the added twist of some rocks to climb. Crampons and ice axe and much more my comfort zone and I really enjoyed getting into my stride. I 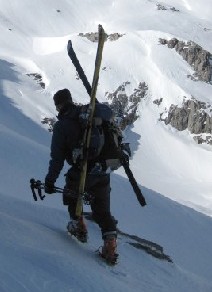 was pleasantly surprised to find that having skis strapped to your pack did not interfere greatly when climbing and are worth any slight inconvenience when the speed of descent is taken into consideration.

However my descent was far from speedy. My inexperience on skis quickly became obvious as the wind-scoured slopes turned very icy. It was immensely frustrating for me and sometimes painful but I eventually managed to stagger down. There is no doubt that the more proficient you are on skis, the more satisfying the trip would be. However Mike does run beginners weeks and the effort expended is more than returned by the scenery and experience.

Sunday was my last full day so rather than add to the ignominy of sliding down Spanish slopes on my arse I opted to hike my way to the top of the mountain behind the house taking the two dogs and snowshoes. It was another warm sunny day and the climb through first a pine forest and then a deciduous wood led to a snow covered ridge, Pena Sagra overlooking the town of Potes. All around were other similar sized mountains and complete silence. The snowshoes coped easily with the deep snow and I had a wonderful day. I stopped at a village bar on the way down in order to refresh and practice my Spanish only to be served by the two most competent English speakers in the area.

If you have ever thought about ski mountaineering then this is the place for you. Cheaper and more friendly than the Alps, the Picos has everything you will require. I had a full four days on the hills and the evening flight would have made a short trip out on the final day a possibility. I opted to have a look around Potes which, being market day, was full of life.

I returned to the UK enthused by the thought of working on my skiing so next year I will be able to make the most of any opportunity that comes along.