Another Year, Another Ski Tour

Two hundred metres past the Fuente De memorial to Franco – whose grandson is, according to one Santander taxi driver, still “very popular” – we parked the wheels of Gaffer Tape Skitours (prop. “Mad” Mike Stuart) and considered our next steps. “You forgot those skins, didn’t you?” Mike asked me, beginning the customary accusations and endless banter that are part and parcel of a Picos skitour experience. I knew I was back. (He hadn’t asked me to take them. He left them on the kitchen table. Fortunately I’d brought another pair, but with glue: my own.)

(Before you continue reading, Gaffer Tape Ski Tours (sic) would just like to point out that this particular client has now been skiing with us 3 times in the last 12 months. The Management).

“Last week there was a foot of fresh powder here”, Mike said, as we surveyed a dusting of fresh snow on what was otherwise largely gravel, mud and water. A fifteen minute walk later, though, I was putting my skins’ abilities to the test (actually, I know they are excellent, as I was at pains to point out to Mike at every possible opportunity) and it wasn’t much longer before he, too, took the plunge and took to his skis, and we plodded on up the track. In view of Mike’s advancing years, rather unbecoming purple waterproof (featuring a marsupial-like front pouch) and the punishing skiing schedule he has ahead of him for 2010 (“bookings are looking good!”) I broke trail, and also occasionally wind. A new warning sign instructed us not to “Have campings next to these watercourses” but, other than that, the landscape we were skinning through looked like it had largely escaped the 20th century, let alone the 21st. 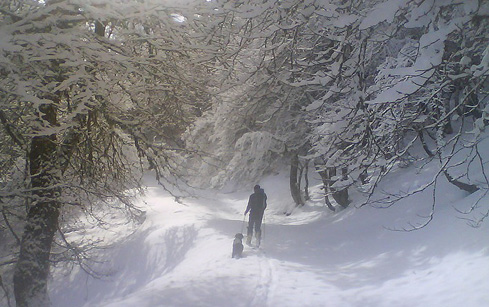 The cloud base was at 1300m over Potes, a little to the north, yet here the tops were clear and picked out against a deep blue sky. Mina (Mike’s dog, one with a curious penchant for bananas) led the way as we struck out above the treeline, heading for Pico de las Treguas. Suddenly, to my amazement, Mike’s skin came off. Fishing out one of the 18 emergency rolls of Gaffer Tape that he carries in his gimmick-laden new rucksack, Mike (known as “Mi__” to his consonantly-challenged Spanish friends), the irrepressibly-jolly Burnley supporter – clearly buoyed by his team’s recent victory in a friendly match against Scottish footballing giants Raith Rovers – had his skins secured to his skis “en un xiffio” (a Spanish term meaning a period of time somewhere between 20 minutes and three weeks). We continued up a scoured and steepening slope and I wondered whether it was time to retrieve my harscheisen from my bag. Mina surveyed our progress from the top of the hill, wearing an expression that looked as close as a dog can get to a mixture of incredulity, pity and derision. However I didn’t feel that bad as I knew that she recently fell through a cornice – a suitable fate for a dog that binges on tropical fruit (I hope she’s not bulimic, though). Happily contemplating this thought, I was at the summit (1910m) en un xiffio, or possibly less, and had a chance to take in the view of an entirely snow-covered Cordillera stretching from one horizon to another, with the Picos Central Massive to my north. 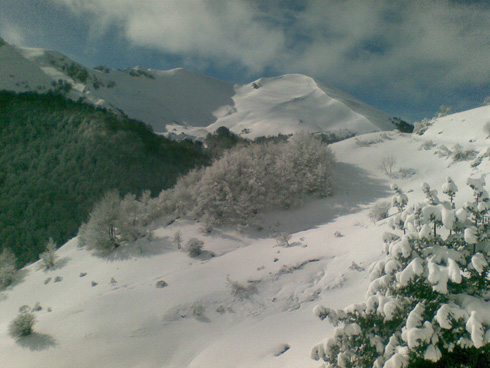 I’ve never skied a cornice before and this tour did not offer that opportunity, although there was a small edge to get over as we dropped into the corrie to head back down into the valley to Fuente De. Some 400m of descent in great snow through open country was a chance to realise that Mike’s Rossignol Bandits really are a damned fine pair of skis - and then it was back into the forest to do battle with overhanging branches as we skied down what was once a track but is now more just a marginally more open route through the trees. Still, it was wonderful and reminded me of that slightly obnoxious yet strangely telling Helly Hansen advertising slogan: “there’s a difference between living and being alive”. Quite how wearing a Helly Hansen product could possibly make this difference is beyond me, but ski-touring in the Picos is something that can, and does.

The beauty of a guide who knows the area like the back of his hand is not only that he takes the p**s out of his guests for having absolutely no idea where they are, but also that he will lead you over unlikely looking fences and down improbable single tracks that suddenly open out into meadows of perfect, ski-able snow that no-one else knows. And it was thus that we returned to the reassuringly solid reliability of the Landrover, and then home.

Day two: the next day

With the Landrover broken down in Santander, Mi__ had no option but to borrow a frankly rather superior vehicle from local outdoor-shop owner Alfredo. Now we were party of seven; Mina was forced to stay at home to gorge herself on bananas and to make way for Euan, Helen, Nick, Sally and of course Scottish ski-touring legend and masseuse Sheena “Easton” Livingstone, veteran of many previous ski-touring forays with Mike and on occasion with the author as well.

Two hundred metres past the Fuente De memorial to Franco we parked the wheels and considered our next steps. “Last week there was a foot of fresh powder here”, Mike said, as we surveyed a foot of fresh powder that was now covering the gravel, mud and water of the previous day, and which was continuing to deepen, profoundly. We could – skin glue permitting – ski from our luxury vehicle, on loan from local climbing guide company Guia Trek.

“Déjà vu?” I thought, as I broke trail once again up the same track as the day before and once again fumed over the grammatical errors in the English on the sign as we entered the national park. But, no, there were subtle differences. Mike’s skins stayed on. It was snowing hard, there was no view, there were seven of us rather than two, Mina was at home eating bananas, there was 1-2 feet of fresh powder to break trail through, and most critically of all there was salami instead of ham for lunch. Still a pork product, of course, but a recognisably different pork product at that, and one that rendered 11th February unequivocally and categorically different for me when I compare it in my mind with the day before. 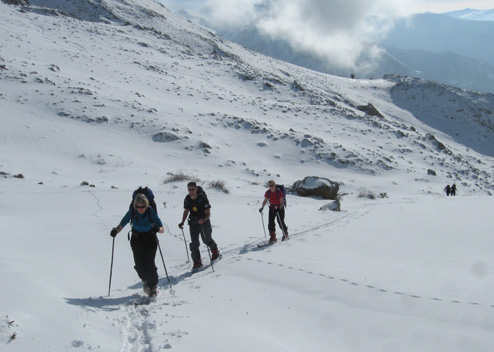 Anything else noticeably different, besides the salami? Well, the snow. The deepest powder I’ve ever skied. Even on Mike’s 195 cm narrow straight-sided skis of mid 90s vintage, it was a dream. That’s touring for you: the same route changes hugely depending on the snow conditions. And today we were in luck. Just a pity that visibility, time and perhaps avalanche risk stopped us going higher and so giving us more of that perfect powder descent.

Fabulous views, excellent snow, highly-qualified yet charmingly idiosyncratic guiding and unlimited Gaffer Tape: who could ask for more from a ski-touring holiday? Not I. Gaffer Tape Skitours – I’m sticking with them.

With thanks once again to Mike and Lisa for many wonderful and unforgettable ski-touring days in the Picos; long may they continue.