Eagles in the Picos

For this large group we brought in friend and local guide Alfredo, to offer maximum flexibility on our skiing and mountaineering options.

After nearly a month of reassuring certain members of the Eagles team that we would have snow for them to ski on, the trip got off to a great start with a cracking first day testing out crampons, harschiesen and skins and eventually skiing the slopes of the Valle del Naranco to the south of the San Glorio Pass in the Cordillera Cantábrica. (See photos above and below). 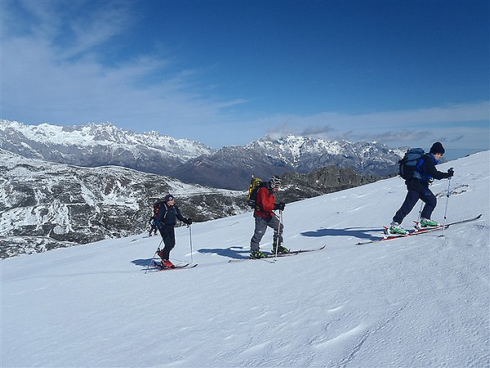 Monday, day 2, from the top of the cable car, brought snow to start with, then a strenghtening westerly wind. The flakes were worryingly wet and as we battled higher up the San Luis gulley the wetter and more battered we became. I decided to run away, no one seemed to mind. 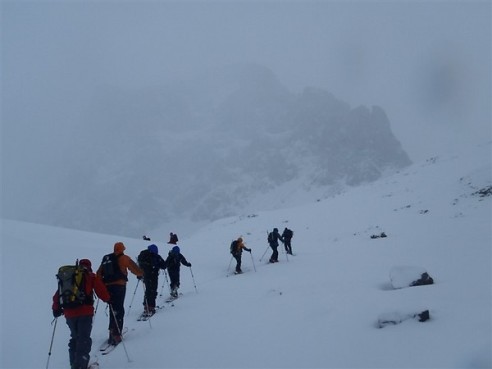 The following day temperatures proved mild with steady drizzle at the house. A reshuffle of plans took us to the mightily impressive Cares Gorge to admire the extraordinary, and depressing from a skier's point of view, phenomenon of melt water fury. 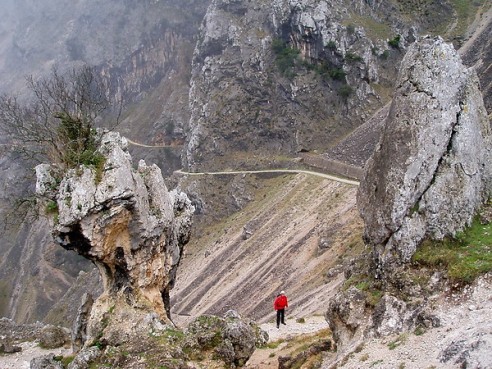 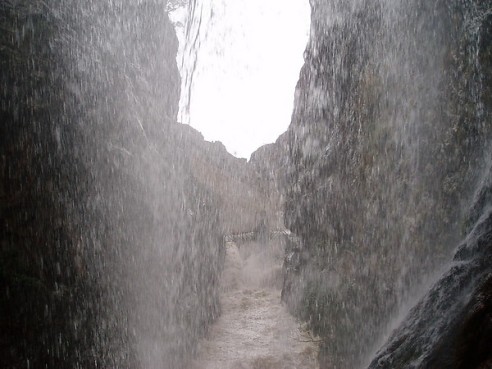 On returning to the valley that evening, as forecasts predicted, the skies began to clear from the south.

Day 4 the landrover was used as a short shuttle to get all of the group as close to the snow as possible. Alfredo led off with the first group and tackled an entertaining gulley. Myself and John selected a more direct line through the broom field (which I couldn’t stop imagining how entertaining it was going to be in a few hours time). 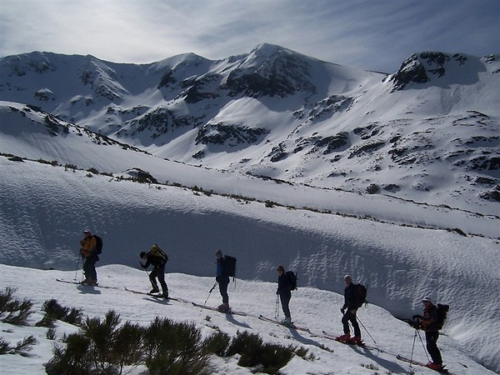 Our route proved to be quicker, giving us a deserved extra few minutes wait in the sun at the top of the Boquerón de Bóbias. Together and rested we set off following the course of the Arroyo de Canaleta to the steepening and hardening slopes of the Altares. 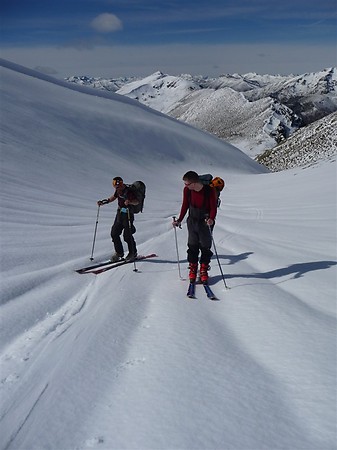 A chill breeze hastened lunch on the ridge and we were soon cramponing across the mixed ground to the summit of Mojon de Tres Provincias. 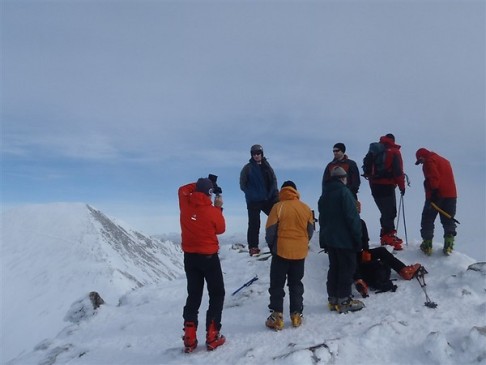 A tentative descending traverse on the upper west-facing slopes soon found us on more friendly southerly aspects. For the most part the descent was an absolute intoxicating joy, if you don’t mention the broom. 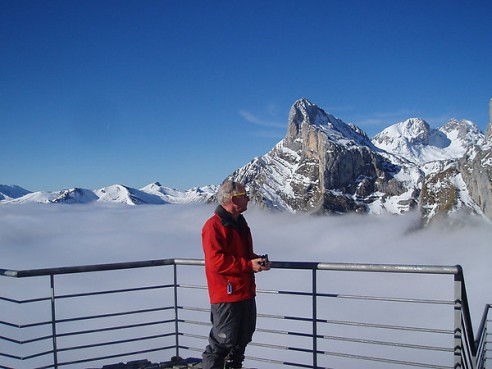 “Oh shit, I’ve forgotten my skins.” Shan't mention any names but if you go to trip report here you may see the irony. TBH, it's not one of my regular tricks, but is one I’m still waiting to make. 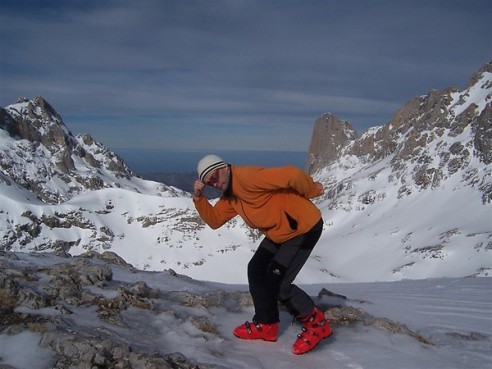 So off the top of the cable car and into a blazing sun, on rock hard frozen snow, perfect, and more than a little fortunate as I was portering my skis. 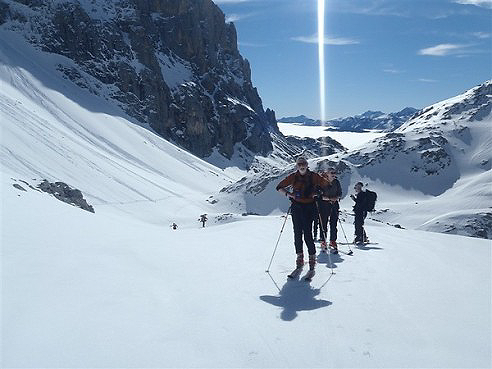 We eventually made the Cabaña Veronica for a well earned lunch and break. 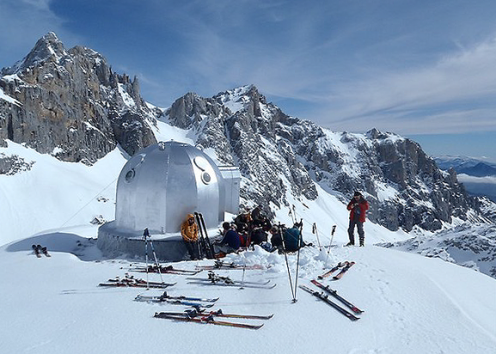 Some of the more enthusiastic members of the team headed off to ski the steep south-east facing gulley that drops into a small hoyo to the north of the Veronica for the rest of the group's entertainment. 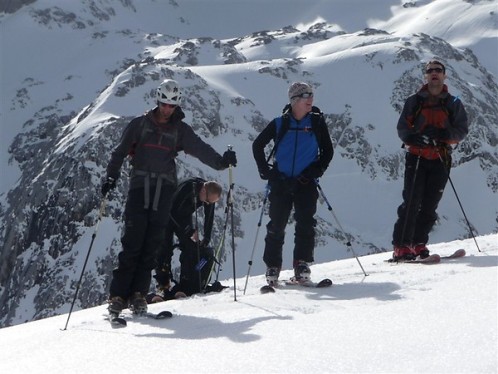 Successfully accomplished the group amassed on the col of Horcados Rojos, where some opted to summit said peak which turned out to be a taxing affair, and not suitable for a ski descent as rightly called by Alfredo. 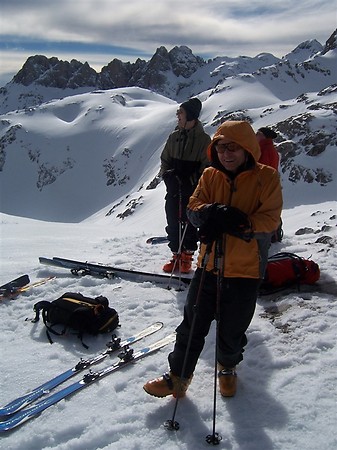 Some posed for photos and still had time for a short descent of the south facing gulley on the flanks of Pico Tesorero, others waited patiently. The snow for the descent was perfect spring corn from top to bottom, having been protected from the worst of the afternoon's glare by a high film of cirrus.

An A team was formed by self selection and we parted company from the B team around Los Lagos Lloroza. 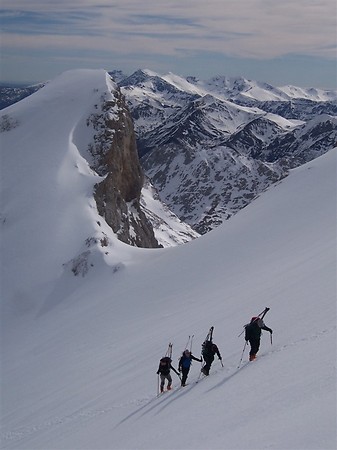 Our objective to summit Torre Blanca and descend back to the cable car via two cols. Normally a straightforward outing for such a strong group but with conditions being so icy on any of the high off south facing slopes, things did tend to get a bit tricky and tight for time, mainly as a result of having to crampon and porter large sections of the circuit that would otherwise be skinnable at least with harsheisun. 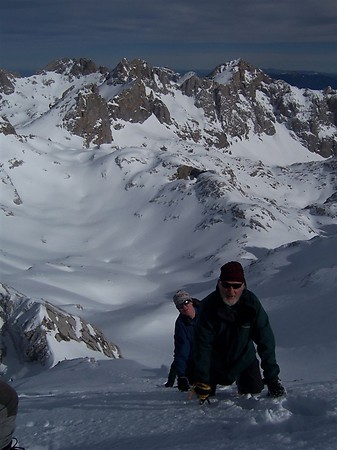 The other group met us at the top of the cable car having had an enjoyable day summitting the peak of Padiorna and descending the Canal de San Luis via el Hoyo Oscuro. 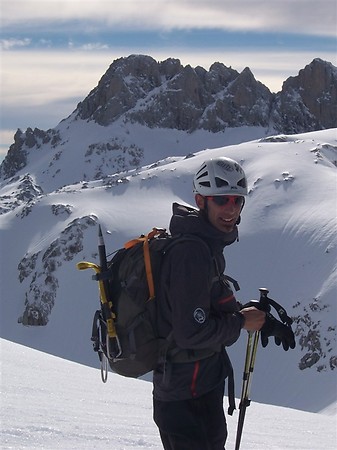 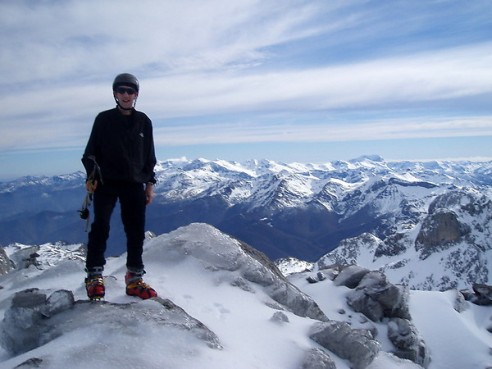 Most wanted to rest but a few hardy souls wanted one last short blast and get back into town for the rugby, preferably showered and changed. To fulfill the remit, a short walk in for a 3 to 4 hrs outing, I decided on the Valle de Mostajal.
At 1,450m this valley rarely disappoints and seems to have its own micro climate. Our walk in was one minute and some generous strips and tongues of snow gradually drew us up onto the open covered slopes. Unfortunately the sun gave up on us as we skinned up in rapid movement into a complete white out. Soon one of those very Scottish features appeared out of the snow, a fence. We had reached the ridge and with it the clouds were separating to give us glimpsing views into the Liebana Valley below. We left our skis 30m below the summit and walked the remainder. Visability during the descent was hugely aided by the poor cover (always look on the bright side) with the odd patch of heather giving away the secrets of the slope. Soon we were under the cloud and bearing through amply spaced broom bushes, as opposed to the skimpy spaced snow patches. After lunch we cruised to the landrover and marveled back at just how good the actual skiing was in such marginal circumstances.

To top it off England beat France.

Many thanks to Alfredo, Tom and John M. for the photos.

Some final shots of what appear to be skiing on a sand dune, and finally a last shot of the snow-covered central massif. 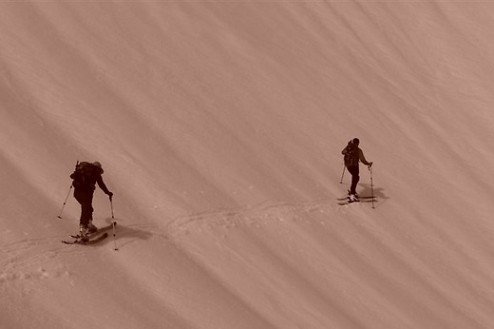 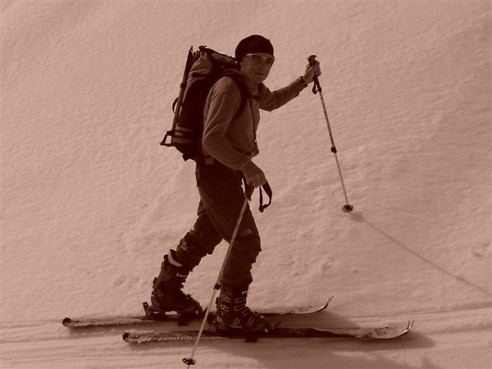 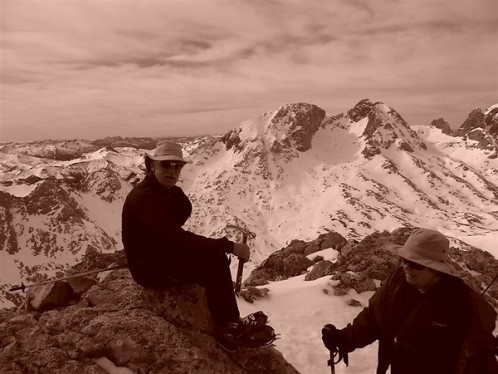 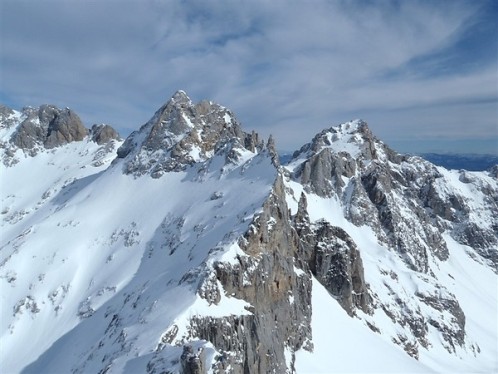