Guardian's week in wildlife images. The photo was taken by a resident of the village of Prioro, just south of Riaño in León, through a glass door at the house entrance. Apparently the animal ran away when the door was opened. Despite a female bear with two cubs having been seen in the vicinity last autumn the Fundación Oso Pardo have doubts as to whether the photo is of a young bear. I agree, those ears look more like a dog's to me. 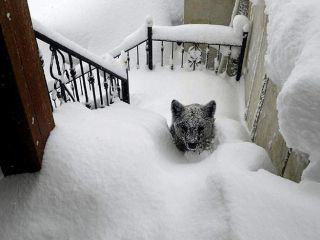 Whatever, the fact that the photographer's first instinct was to grab his camera can only be good news for the fragile eastern population of Spain's brown bears.