The latest news from the Cantabrian mountains is a mixture of good and bad, the latter sadly becoming par for the course. 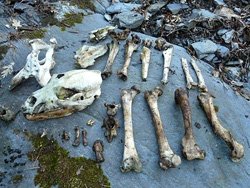 This week the remains of a bear were found in Páramo del Sil in the north-west of León province, not far from the border with Asturias. The bones were discovered by an individual who then alerted the authorities. An autopsy is being carried out to determine the cause of death although the results could be delayed due to the advanced state of decay.

Roberto Hartasánchez, of the Asturian-based NGO Fapas, has not held back with his opinion of Castile-León's bear conservation management, pointing out that the majority of unnatural ursine deaths occur in their provinces. (Of the now thirteen dead bears in the last ten years, ten were found in Castilla and León). In his opinion, the Junta (regional government) is not making any extra efforts to protect the bears in their area because the bears' very presence is holding back the go ahead for the projected San Glorio ski resort, which they are backing.

So, to the good news. The provisional count for females with cubs in 2009 is currently standing at twenty one; eighteen in the western sector and three in the eastern. It's possible this figure will rise as there could be more families of cubs born in 2008 that haven't been counted yet.

And in Galicia, signs of bear movement have been detected in the area around O Courel, probably of young individuals dispersing from the León part of the Sierra de Ancares in the western Cantabrian mountains where there are two breeding females. Public opinion appears to be favourable. Galicians have seen how their Asturian neighbours have profitted by having bears in their territory. Time will tell how the Galician government reacts to the possibility of having their own in theirs.