Villarina is a young wild Cantabrian brown bear with a very interesting history.

She was found wandering the side of the road by a couple (I think from Madrid), driving on holiday in Asturias in June of 2008. Having ascertained that there was no mother bear in the vicinity they put her in their car and drove to the nearest police station in Somiedo. Following veterinary examinations the 5 - 6 month-old cub, of some 4 kilos, was found to have cranial 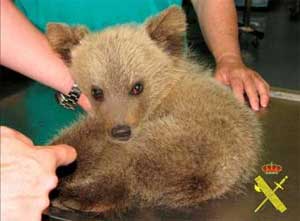 contusions and a dilated pupil, injuries concurrent with a blow to the head but they considered her healthy enough to try reintroducing her to the area in which she'd been found. (It's still not certain whether these injuries were caused by a car or a male bear with infanticidic tendencies although considering her whereabouts I think the former is the most likely). Various reintroduction attempts failed, the cub insisting on returning to the road, the place she'd last seen her mother perhaps? So she was again taken in, this time to a clinic in Oviedo where they discovered a blood clot causing pressure on her brain and epilectic fits. Meanwhile, a female bear and her three cubs had been being monitored in the area and when it was discovered that one of her cubs was missing, this cub's family had been found. The cub was again moved, a month after her rescue, this time to the veterinary care of Cabárceno wildlife park near Santander in the neighbouring autonomous community of Cantabria where there was room and facilities to keep her under observation.

The local press, of course, had a field day with the news story. Who couldn't fall in love with her? It seemed that everyone was concerned for her health while I couldn't help thinking what a great envoy she was becoming for the rest of her species out there in the wild, of which not everyone had been previously enamoured. Name the cub competitions were started with Villarina being the most popular monicker for the new star, the name deriving from the village near where she'd been found, Villarín.

While Villarina recuperated from her trauma and began to put on weight the experts, including members of the local NGO's Fapas and Fundación Oso Pardo, were determined that a reintroduction would go ahead. After much debate, and a suggestion of introducing the cub into the eastern bear population of Cantabria, León and Palencia 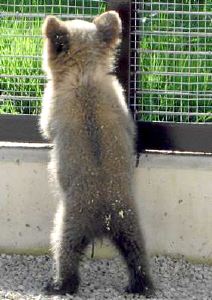 where the possibility of a future breeding female would be so valuable, it was eventually decided best to put her back into her home territory of Somiedo, Asturias. The brand new installation for a Capercaillie conservation programme in Sobrescobio, so new it hadn't had a whiff of a bird's egg let alone the odour of a bear, was chosen for her final recuperation phase. Here she had less human contact, peace and quiet and time to grow enough to ease the concerns of everyone involved in her well-being.

Villarina was re-released in early November of 2008 into a valley neighbouring that of her mother, emulating what would have been a natural process. She then weighed 28 kilos and was fitted with two radio transmitters and monitored, to begin with, for 24 hours a day by a team of biologists from the environmental department of the regional government and members of Fapas and FOP. She foraged, fattened up and found a den in which to escape the worst excesses of her first winter alone. In May 2009 she was photographed still wearing one of the radio transmitters.

An invaluable conservation experience for all those involved.

The valley Villarina was released into has long been monitored by the remote cameras of Fapas. Here's their latest (and best so far I think) video of Villarina and some other species that share her home.