Since April of this year, when an individual was first sighted in 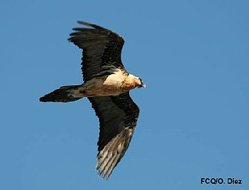 sighting, on the 2nd of June, comes from the Cares gorge area of Asturias, specifically in the northern end near the villages of Poncebos and Camarmeña from where a goatherd guarding his flock called the FCQ who were able to confirm the sighting of a 5 or 6 year-old bird in dispersal from the Pyrenees. This follows two earlier reports of sightings in May, probably of the same bird, from around the Cantabrian villages of La Hermida and Dobres. Supplementary food (bones) is being brought in to encourage the bird to hang around although it's not expected to stay as there is currently no breeding population here.

The FCQ have spent some years now planning on reintroducing Lammergeier to the Picos though opposition from other ornithological societies is causing delay. Concerns centre on the local's still persisting habit of leaving poisoned bait meant for other species, mainly wolf. Lammergeiers, being at the end of the food chain, would also die having ingested any remains of poisoned wildlife. Until this threat can be overcome it seems unlikely that the programme will go ahead.