Following the release of the two young birds in 2010 they both survived the winter but sadly one of them, Leoncia, was found dead last April in the Sierra del Cuera towards the Cantabrian coast. The post-mortem examination showed no signs of poison or any other unnatural causes of death.

The remaining bird of the project, Deva, moved at this time from the Sierra del Cuera to fly west across the Cantabrian mountains almost reaching Galicia. In early summer she was checking out the Desfiladero de La Hermida, a gorge between Panes and Potes, and the valleys of Liébana where she was spotted regularly sometimes accompanied by at least four other individuals in natural dispersion from the Pyrenees. (I saw one bird around this time flying over Rases above Potes but didn't have my bin's with me as I was shopping ). Deva is currently being monitored flying above the Cares gorge, gradually losing her juvenile plumage. 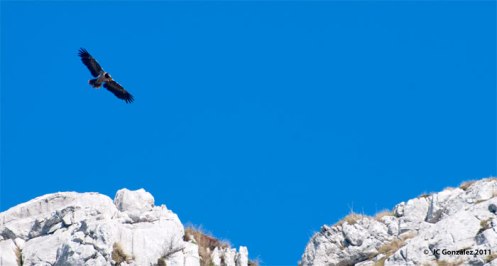 Due to changes in government following this year's regional elections the project's planned release of two other birds in the Picos de Europa has been put on hold until next year.