The three Ospreys, Pandion haliaetus, being monitored by conservation group Fapas have returned for another year to overwinter in the estuaries of Asturias, arriving mid-September and leaving towards the end of March.

From west to east the river estuaries being used are the Eo, Nalón and the tidal inlet Ría de Villaviciosa Natural Reserve. With their project, Alerta Pescadora, Fapas have built artificial nests and set up automatic cameras hoping to encourage Ospreys to breed in the area again after an absence of 50 - 60 years. Elsewhere on the Cantabrian coast there are a few other individuals overwintering in, for example, the Santoña marshes while currently there are still breeding pairs in the Canaries, Balearics and coasts of Andalucia and southern Portugal. See Osprey report from SEO/Birdlife. 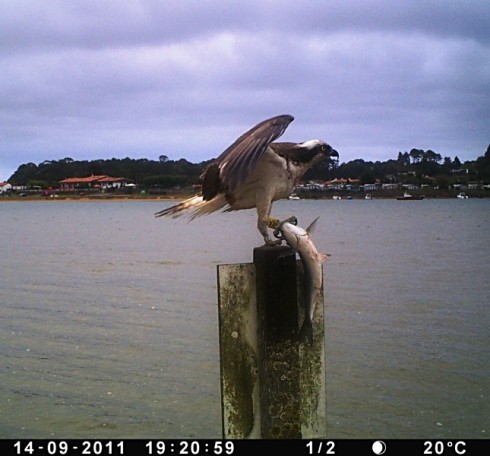 The Osprey overwintering in the Ría de Villaviciosa is a male that they guess is 11 years old. Named Ben, he has been ringed with a yellow tag on his right leg marked "4A" but so far has not been identified either on passage to and from or in his summer breeding grounds, which they think might be somewhere in Scotland. This is his 5th consecutive winter in the estuary since being ringed.

Here's a video of Ben, and other visitors, at one of his habitual landing posts.