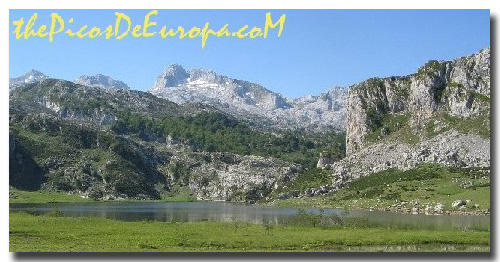 A combination of glaciation and karstification processes over a period of 300 million years has led to the present formation of the mostly limestone Picos de Europa mountains. The steeply jagged peaks have been separated from the Cantabrian mountain chain by, among other geological factors, glaciers forging their way around them, creating wide valleys on the peripheries while water erosion has further separated the soft rock into three massifs; the Western (el Cornión), the Central (los Urrieles) and the Eastern (Ándara). The river Cares divides the Western and Central Massifs and the river Duje splits the Central and Eastern. (Click on the relief map to enlarge).

Some small lakes remain, although due to the porous nature of the rock there is very little superficial water in the Picos, the greatest volume of it being channelled underground through some of the deepest cave systems found in Europe today, much of which emerges lower down in the form of natural springs. A closer inspection of the surface limestone reveals the effect that acidic rain has on the rock, providing fantastic friction for walking and climbing and perfect niches for alpine plants. Sharp runnels become, as the water gouges deeper, clints, grikes and in places vast potholes, the latter making the Picos de Europa infamous for the dangers faced by walkers and mountaineers alike and known locally as "jous".

Its proximity to the sea, precisely the Atlantic ocean and the Bay of Biscay, explains why the Picos de Europa mountain range is particularly prone to sudden changes in weather; mists rolling in, clag appearing from nowhere, which can further complicate navigation. Legend has it that the mountains were named the Peaks of Europe by northern European sailors arriving by sea. On a clear day modern visitors crossing the Bay of Biscay, arriving by ferry into Santander, can appreciate the same view.

The Picos de Europa belong to three of Spain's Autonomous Communities, Asturias, Castilla León and Cantabria. The summit of Pico Tesorero (2,570m) in the Central Massif, is the point at which the three regions join. The highest summit in the Picos de Europa is Pico Torrecerredo at 2,648m in the Central Massif, Peña Santa at 2,596m is the highest in the Western and the Morra de Lechugales at 2,444m,

the highest in the Eastern making the Picos de Europa the third highest mountain range of mainland Spain after the Pyrenees and the Sierra Nevada. The range includes 14 peaks over 2,600m. The most well-known of these mountains is Naranjo de Bulnes (2,519m), more commonly known as "Urriello" though more correctly named "El Pico Urriello", or in the Asturian dialect, "Picu Urriellu", or even more fondly, "El Picu". Naranjo means orange in Spanish and refers to the colour of the minerals showing on the rock. Bulnes is the nearest village, lying below.

First created in 1918 to mark the 12th centenary of the Battle of Covadonga, the area originally given National Park status covered almost 17,000 ha. in the Western Massif only and was named "Parque Nacional de la Montaña de Covadonga" (National Park of the Covadonga Mountains). It wasn't until the 30th of May, 1995 that the Picos de Europa National Park was enlarged to finally encompass the other two massifs, causing not a little consternation among the farming community of the eastern sector concerned for the future of their traditional land management practices. It presently includes a total of 64,660 ha.

Conservation of the Picos is complicated further by the need to find a co-existence between nature and the unusually large number of the National Park's human inhabitants. Processes are currently underway to widen the park's area of socio-economic influence and the governing body, formerly the Spanish Ministry for the Environment, is to be devolved to be shared between the three

Autonomous Communities. Not surprisingly, this is causing concern among conservationists who perceive a lack of cohesion in its future management.

The limestone formation of the Picos de Europa, so close to the coast, with its eco-systems combining both mixed Atlantic (eg. Beech, Holm and Pyrenean oaks) and Mediterranean forest habitats (including Cork oak) alongside that of alpine pasture and man-managed hay meadows has led to international recognition and its inclusion in the European Union's Habitats Directive. From this it is included in the Natura 2000 network, from which springs its designation of Special Protection Areas (in Spanish, ZEPA's, Zonas de Especial Protección para las Aves) and Sites of Community Importance (in Spanish, LIC's, Lugares de Importancia Comunitaria). In July 2003 the Picos de Europa were made a Biosphere Reserve by UNESCO. 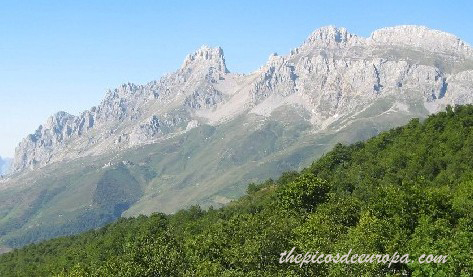 Of the wildlife found in the Picos, particularly noteworthy are; the Cantabrian Capercaillie, Tetrao urogallus cantabricus, a highly endangered bird dependent on a fragile habitat of ancient deciduous woods and heather-clad hillsides; the Cantabrian brown bear, Ursus arctos, also highly endangered and living in the high hilltops and woods of the surrounding valleys and an occasional visitor to the Picos themselves; the Iberian wolf, Canis lupus signatus, of which only a few small packs remain here; and the Cantabrian chamois, Rupicapra pyrenaica ssp.parva, the emblem of the Picos de Europa National Park. Other resident bird species include Griffon vulture, Gyps fulvus, Golden eagle, Aquila chrysaetos, and Black woodpecker, Dryocopus martius.

Browse the Picos Wildlife menus above on the right for detailed information on these species and more. 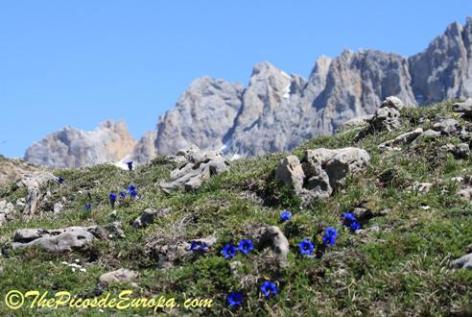