Paca and Tola are the only Cantabrian brown bears in captivity. Here's their story. 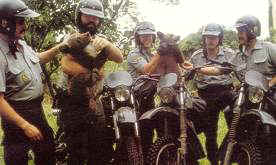 In 1989 the cubs were discovered in a private house having been reported by a neighbour. The owner was found to have killed their mother and kept the cubs. The four-month old cubs were confiscated by Seprona, the wildlife protection unit of the Guardia Civil, seen here, and taken to the home of local naturalist and head of wildlife conservation NGO, Fapas, Roberto Hartasanchez.

Here the cubs had a garden to play in and children to play with but a more permanent home had to be found as they were growing fast. They travelled to Barcelona and Cuenca before arriving at their final home in Proaza, Asturias in an enclosure built especially for them. Releasing the bears was out of the question as they'd become far too human-habituated. They would have been drawn to human habitation attracted by the food associated with people.

Their home is a hillside in the Trubia valley of Asturias.

The enclosure built to house the animals was paid for by the Asturian government and covers more than 4 ha. alongside a cycle/walking path, the Senda del Oso. Within the bears can forage naturally and hibernate when necessary but come down to be fed daily at 12.00 by a warden of the Fundación Oso de Asturias, the entity in charge of their care.

In the village there's a visitors centre, the Casa del Oso, where you can learn about the bears and their natural habitat.

It's interesting to hear their keeper talk of the differing personalities of the two. Tola is more wary and hesitant while Paca, above, is much more confident. 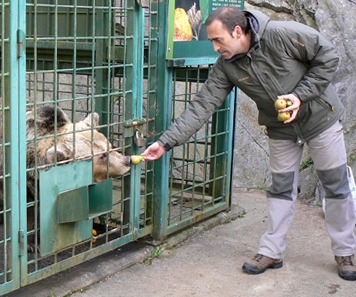 Paca and Tola are now twenty one years old, getting on a bit for breeding, but there are plans to possibly breed from them using a wild, male Cantabrian brown bear, however these are complicated. To first test the bears' fertility a captive male European brown bear, Furaco (below), was drafted in from the Cabárceno wildlife park near Santander. He mated with Tola (eventually!) last spring, 2009, but it won´t be known whether the coupling was successful or not until Tola emerges from her den this year.

(See reproduction of the Cantabrian brown bear). If she appears earlier than April/May that will be a sign that she hasn´t given birth or that there have been problems. Emerging at the hoped for date, she should have a cub, or cubs, in tow. Paca is currently housed in the new, separate enclosure built nearby for the experiment, passing the winter months alone having previously, and very unusually, passed previous winters together in a den with her sister. Other concerns are that the two females have experienced no imprinting, parental skills taught them by their own mother. Personally I would bet on instinct being perfectly strong enough for them to just do what comes naturally. It's a shame that any cub/s will be destined for a life in semi-captivity although Paca and Tola are very popular among Asturians and are doing a sterling job of educating us on the rest of their species and their delicate situation in the wild.

Whichever the bears are in Proaza, they are well worth a visit! We may even see cubs being reintroduced into the Cantabrian mountains in the future.

Tel. +34 985963060 or This email address is being protected from spambots. You need JavaScript enabled to view it.