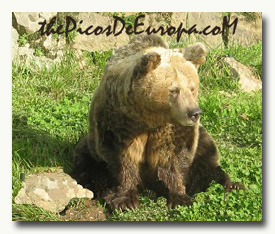 Listed in the Spanish Catalogue of Endangered Species (Catálogo Nacional de Especies Amenazadas) as being in danger of extinction, the Cantabrian brown bear’s existence in Spain is not widely known internationally.

Due to the geography of the Iberian peninsular, these plantigrades have developed a slightly different genetic identity to other brown bears, including the European. However, they have not yet been recognised by the scientific community as a distinct subspecies, being referred to as simply Ursus arctos.

Historically, the Cantabrian brown bear was seen by man to be competition for food. Having once roamed most of the mountains of the Iberian peninsular, the Cantabrian brown bear’s population was reduced in the first half of the twentieth century to two isolated pockets in the mountains of the Cordillera Cantábrica. Systematic persecution through hunting led to a drastic decline in numbers, a total ban not coming into force until 1973. The maximum fine for killing a bear in Spain is now €300,000. Latest figures give a total of around 160 bears split between a population straddling the borders of Asturias, León and Galicia to the west (120 -130) and another population around the borders of Cantabria, León and Asturias to the east (30 – 40), separated by some 30km. 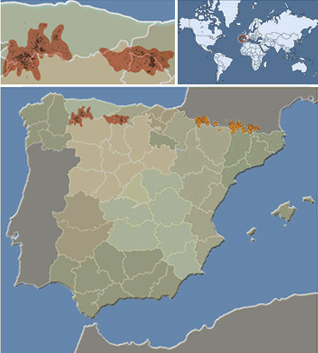 Weighing in at an average of 130kg for females and 180kg for males and measuring between 1.6m–2m in length and between 0.90m-1m in height, the Cantabrian brown bear, or oso pardo cantábrico, is the smallest of the brown bear family. Their weight varies hugely depending on the time of year. Emerging from their winter hibernative state they can be very underweight and need to feed to restore their body fat whereas during the autumn they should be at their heaviest in readiness for seeing out the winter, although the last couple of winters in the Cordillera Cantábrica have been so mild that the bears have not needed to hibernate at all. 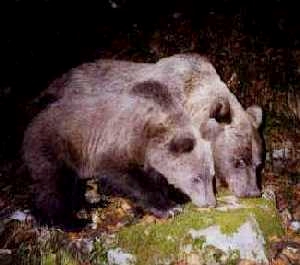 After mating in the spring females give birth in December/January to cubs weighing only about 350g each. This is tiny compared to the size of the mother and doesn’t correlate with the length of the nine-month gestation period. Interestingly, it has been discovered that there is a natural delay in the development of the fertilised eggs early on at the blastocyst stage, the eggs not becoming implanted in the uterus until five months after mating. This is attributed to the fact that the female doesn’t eat during the latter stages of pregnancy as her metabolic rate slows down for winter. To compensate for this her milk is extremely rich in nutrients and the young grow quickly. Litters are usually two, occasionally three, and will stay with their mother for eighteen months to two years. 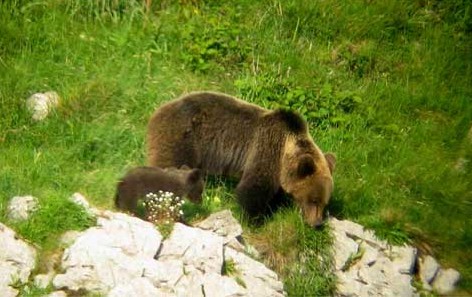 Infant mortality is high with only one of the young likely to reach maturity. On emerging from the den in spring the cubs have many dangers to face including disease and the male bear’s predilection for infanticide in the hope that this will prematurely bring the mother into season again, this naturally not happening for about three years after giving birth. The main cause of death among bears is now, however, man-induced. Furtive trapping using snares and poisoned bait left for other species such as wild boar still causes deaths among the bears. Between 1980 and 1994, 54 Cantabrian brown bears died at the hands of furtive hunters. Of these, 19 were caught in traps, 2 were poisoned and the rest were shot. The oso pardo cantábrico is not aggressive and would rather flee than confront.

The Cantabrian brown bear is an opportunistic omnivore. Eating mainly plants, roots, fruit, berries and nuts, its mostly vegetarian diet is supplemented by insects, eggs, honey, fungi and carrion. Since the outbreak of Bovine spongiform encephalopathy (BSE or mad cow disease), the EU brought in laws enforcing the removal of carcasses from the countryside. This had led to a drastic shortage of carrion for the more well-known carrion eaters such as Griffon vultures and Red kites. A less well-known fact is that bears also rely on carrion, especially in the spring when they need to boost their body weight lost through the winter and in the autumn when they need to store as much fat as possible in order to survive the coming winter and its scarce food supply. An estimated 8–10 cubs died this spring (2007) due to, it is believed, the lack of carrion on the ground. Apiarists are also suffering as beehives are being destroyed by the bears in their search for other food supplies. Although the laws have been revised conditionally for the re-opening of feeding stations (muladeros) for carrion eating birds, provision has yet to be made for the bears. The matter is currently under discussion at the EU. (Update - as of  early 2011 implementation of the law has been passed to the control of the respective regional governments). 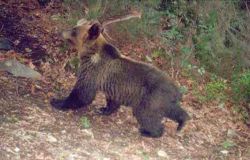 Conservation efforts presently centre on joining the two isolated populations with the purpose of strengthening the gene pool and create a viable population of bears. Groups such as the Fundación Oso Pardo (FOP) and the Fundación para la Protección de Animales Salvajes (FAPAS) are working towards creating a communication corridor of protected land for the two bear-inhabited zones. Fapas, in particular, are doing some very interesting work including photographic monitoring, planting of fruit trees, encouraging the goodwill of hunters to collaborate with the locating of snares, and the installation of beehives. A "Plan para la Recuperación del Oso Pardo Cantábrico" has been drawn up by the Spanish Ministry of the Environment to unite all efforts towards the conservation of this most emblematic of Spanish species.

A major threat to the bear’s survival, however, is currently being posed in the form of a project to build a macro ski resort in the area of the San Glorio pass in the middle of the main corridor of access for the two bear populations. Much of this area is covered by the EU’s Natura 2000 and Habitat’s Directive protection laws. A national law, the Ley de Ordenación del Territorio has already been modified due to pressure from lawyers working for the promoters of the resort, Tres Provincias S.A., to enable this kind of project to go ahead if seen to be of financial benefit to the local community. A Green Party MEP based in Valencia, David Hammerstein, has taken the matter to the EU and groups such as the Plataforma en Defensa de San Glorio (PDSG) are working towards halting the project. Ridiculously, the promoters have asked the EU for €45,000,000 (40% of the estimate) in funds to finance the project, the very same institution that made the laws to protect the rich, natural habitat of the area.

An online protest petition can be signed here.