The opinion poll covered a broad spectrum of society of more than 550 people including hunters, farmers, students and tourists, most living within the Park or within 30 km's of it, reaching interesting conclusions. For 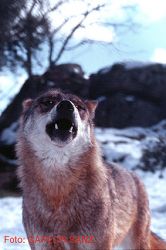 example "only", they say, 60% of Park visitors would be prepared to pay for guided tours to see wolves while 70% would go if the trips were free. Some 10% of the visitors questioned wouldn´t like to see or hear a wolf in the wild. However, the majority of visitors polled cited contact with nature, seeing the countryside and escaping the stress and routine of daily life as being of primary importance. Next came visiting villages, observing wildlife and hiking. As expected, the most negative views came from the farmers and hunters.

The Iberian wolf, Canis lupus signatus, has long been seen as vermin (in Spanish, alimaña) by these groups. Back in the sixties the respected Spanish naturalist, Félix Rodriguez de la Fuente, began to dispel the myths surrounding the species. After an in-depth study of wolf behaviour he concluded, "After living among wolves for two years studying their behaviour and society, I could weigh up the reasoning of the wolves and the reasoning of my fellow men. Up to now I've been told a pack of lies. On the other hand, what the wolves have told me are unquestionable truths. The cruel wolf is an unconditional protector of the weak and females of its species; the sly, mercenary wolf is capable of being faithful to its death; the murderous wolf is a hunter that kills to eat but detests violence".

The study advocates more education among hunters, hoteliers, farmers and students as these are the groups that have shown the least understanding of the wolf's impact on hunting. The study's authors believe that a negative attitude has been so instilled that they are only seen as a harmful species. The wolf problem hasn´t been helped, according to the study, neither by the political use made of the subject above all during local elections, and in the Asturian more than the other two administrations involved, nor by the quick, easy decisions that have been taken to solve what is a complex situation that requires the constant involvement of local farmers.

So, more has to be discovered on exactly where 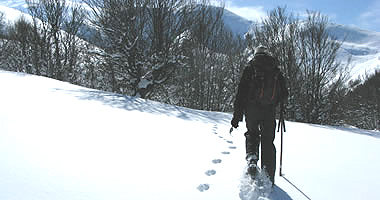 the territories of these wolves are and what use they make of them. The first step to radio.collaring an individual from each family group is to locate them, obviously, and the biologists hope this will be made easier by the winter's snow cover, although the tracking began last summer. The collars will be fiited with GPS and GSM satellite technology to follow the wolves' movements over the course of a year.

Pressure has been on the Picos de Europa National Park to work on the wolf situation. In 2008 there were 50 (157 head) cases of wolf depredation on livestock submitted for damages, the figure rose to 73 (200 head) in 2009. Damages paid out rose from €23.721 per head to €42.227 per head in the same years. Farmers are concerned about a new trend of attacks on cattle. This will be the first time wolves have been radio-tracked in the Picos de Europa National Park.

Info and photo above from the Diario de León.