The Serra de Espadá couldn’t possibly be missed out, not least because an actual picture of one of our quarry, a Two-tailed pasha, is proudly displayed on its pages in our bible, the afore-mentioned Traveller’s Nature Guide to Spain. 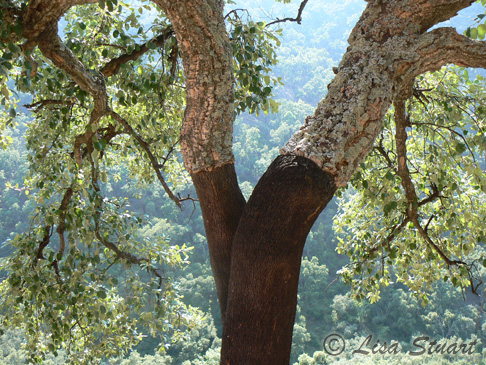 We searched thoroughly though couldn’t turn up a single Strawberry tree, Arbutus unedo, their caterpillar’s food plants. Thankfully the Cork oaks swathing the mountainside were photogenic and home to woodpeckers, their tell-tale nesting holes now abandoned, Nuthatch, Firecrest and the biggest ant I’ve ever seen (aren’t they all?), a Wood ant. 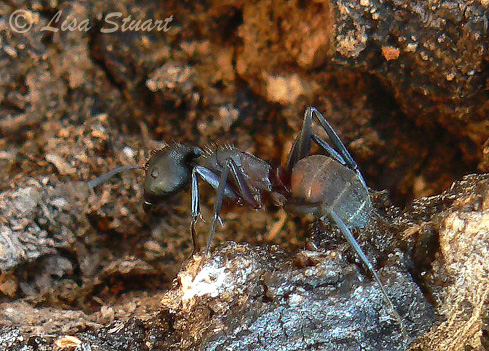 I was surprisingly pleased to see a Great tit, realising that with all the summer visitors at home it had been a long time since I’d noticed one. A camera-shy, female Large psammodromus, one of the few lizards we saw this trip, scurried under the fallen leaves. There was just time to try and digitally catch a Yellow-veined darter and powdery blue skimmers before carrying on our journey. But would we have time to fit in Els Ports and a drink with Tony?

With two nights in comfy beds under our belts and the disappointment of the Espadá mountain range, we decided it was time to dig out the tent from under the gear in the car and look forward to a night camping on the Ebro delta. 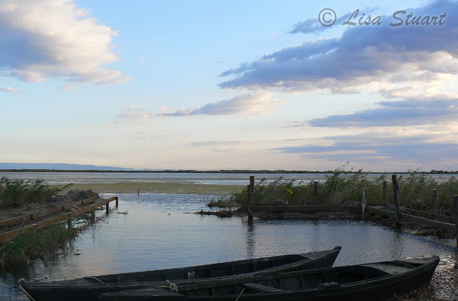 Driving through the rice paddies gave us a taste of what was to come. Grey herons and all three species of egret were everywhere we looked and, joy of joys, a Kingfisher shot along the ditch next to the road, flashing its turquoise blue and burnt orange colours. (It was about this point that I gave up scanning for little white flowers.)
Conservation of this important wetland is complicated by the fact that so many people live and work in the delta. Towns, low-rise and long, meld with the landscape, taking up as little of the precious reclaimed ground as possible. A great deal of the land is given over to rice production and while we were there the harvest was well under way, egrets dicing with death to enjoy easy pickings from the blades of the great machinery. 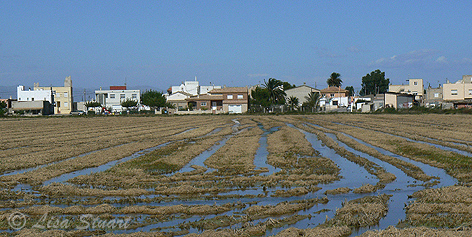 T plumped for the campsite near the dunes on the north-east side of the delta in a last-ditch attempt to find those Plain tigers and we arrived with minutes to spare before the site closed its gates. I hate campsites. On this one I saw my first kitchen tents, microwaves and all. Still, the place was nearly empty and I slept well without the need to zip up my sleeping bag and dreamt of flamingos.
At dawn we were up and raring to go. A brisk stretch of the legs took us to a hide where, along with the early-rising Marsh harriers, a Hummingbird hawkmoth was up with the lark and seemingly enjoying the sap seeping from the green wood of the new look-out. There were more Purple gallinule stalking around the reeds and lots of ducks. I’m sorry to say that unless it’s a Mallard, a duck is a duck to me, although T did point out some Red-crested pochard later. A couple of Black or Bar-tailed godwits rummaged around in the sand at the water’s edge, probing with their extremely long, slightly upturned bills.
An unpromising, choppy sea didn’t bode well for any butterfly species at all but at least the wind had blown the clouds away. Dashing back to the campsite to pack up, a more than likely Short-eared owl skimmed the ground in front of us.
We optimistically started our search in the dunes of the Platja de la Marquesa, turning up plenty of milkweed but, you guessed it, no Danaus chrysippus. Leaving T to it, I played at creeping up unawares on the Kingfishers plying the dyke between the rice and the sea. The blue and orange team won. Crested larks kept slightly more still. In fact, larks in their various forms were probably the most numerous birds throughout the whole trip, although very few were identifiable. Back in the dunes for more stationary objects, only briefly sheltered from the stiff breeze, I spied something black and orange. Could it be a Plain tiger caterpillar? On the wrong plant for a start, it turned out to be a strangely-named Kew arches, Brithys crini. A boringly plain brown as an adult moth, this striking youth was feeding on a Sea daffodil, Pancratium maritimum, the white flowers long gone and the pods now dropping lustrously black seeds resembling little lumps of coal.

Nearby, a small group of bronze-coloured fungi had popped up through the fine sand. (A small but important piece of advice here, don’t forget you might still have bins around your neck when lying on sand to photograph the finer details of dune wildlife.)
Abandoning the north and east-facing flanks of the delta, we crossed the majestic Ebro aboard one of the flat-bottomed car ferries and aimed for the lagoons and salt pans of the southern side, eyes now peeled for Glossy ibis and Greater flamingo. 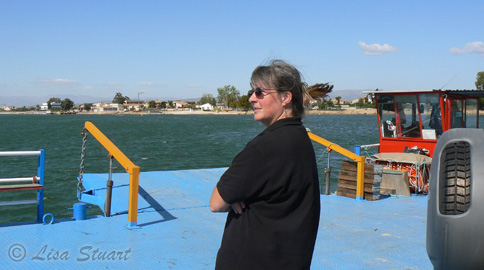 The former didn’t appear at all but we did see a few, far-off flamingos though even with the bins not close enough for a good study. We paused between lagoons for yet another cheese and ham sandwich while a Caspian tern amused us with its aerial displays of fishing tactics. 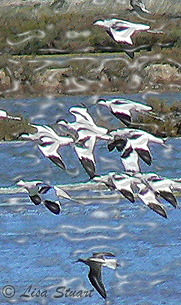 Yet another Kingfisher amenably (and surprisingly) perched, close by, long enough for a good look at its impressively outsized bill. I discovered that many of these birds leave their summer inland territories to over-winter in sites on the coast. The Ebro delta is obviously a favourite!
A little further on, a party of Avocets were siesta-ing and three Cormorants were sitting on poles sticking out of the sea. Looking up, expecting a large raptor to be another Marsh harrier, an Osprey was joining in the fishing bonanza. I dashed up a handily-positioned look-out tower and had great views as it circled close by, too excited to bother with the camera, I just enjoyed watching my first Osprey!
The last of the day’s sun was catching a huge, threatening cumulonimbus above the hills from the motorway as I spied out of the corner of my eye…..a green kestrel? Parakeet! We must be nearing Barcelona and dinner at Nick’s with Lucy.