Nothing had really prepared me for the subtle beauty of Los Monegros. I was expecting an arid, barren desert, although thanks to Insectarium Virtual’s “Testing Los Monegros” I knew it was extraordinarily rich in insect life. What I wasn’t expecting were the vast canvasses of colours, shapes and forms. Shadowy folds in the moulded, flat-topped hills, once dark with Spanish juniper and pines now almost denuded by man, contrasted with foregrounds of the palest of soils dotted with dark green mounds of wild herbs, all blanketed by that big blue sky. 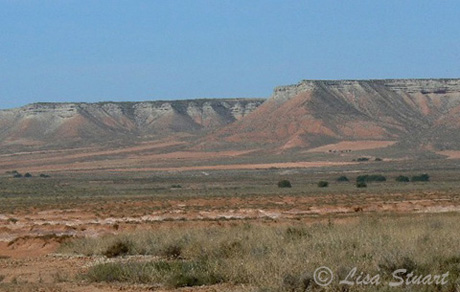 As the Friends of Los Monegros suggest, perhaps it takes an outsider to appreciate the true worth of this steppe environment. A statement that’s certainly true if all the inhabitants can come up with to revitalise their home ground is to plaster it with casinos! 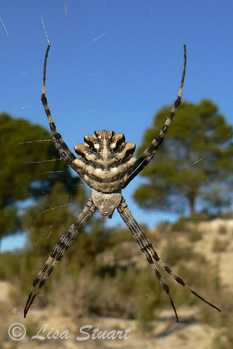 Having spent our first night in a strangely false castillo of a roadside hostal, with the added interest of what I first took to be an aviary but which turned out to be a starling roost right outside our window (were we that obvious?), we started our exploration in a conserved wooded area called the Retuerta de Pino. The underlying rock here is gypsum, glittery white and crumbly where exposed. The hillocky scrub pockmarked with rabbit warrens seemed to me to be perfect lynx territory, or would be if there were enough of it left intact. Instead we found a fantastic Argiope lobata amid the morning song of Woodlark.
Heading in a south-westerly direction with the morning sun warming things up nicely, we paused for another rummage around on the slope of a rise overlooking harvested cereal crops, the Loma de Piedrafita. A wheatear joined us briefly but I couldn’t get the bins on it before it disappeared. We heard Black-bellied sandgrouse and I found the best reptile of the trip, a juvenile Spiny-footed lizard Acanthodactylus erythrurus, striped and sporting its young bright red tail. There was plenty of sky here for Marsh harrier, Red kite and a group of 14 Griffons flying low. 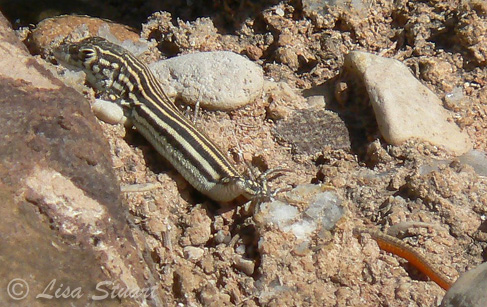 Driving on through olive groves, we crossed the Ebro into the part of the basin known as El Planerón, eyes down for Dupont’s lark. I was having enough trouble with Crested, Thekla and all the rest without another one being thrown into the equation. Calandra was the only one that I’d been able to confidently agree with, the white on their wings helpfully distinguishing them when they were in flight. One possible giveaway I remember is that Dupont’s tend to run away in front of you rather than take to the air. Anyway, we didn’t see any. We scoured the edges of the furrowed fields for perfectly camouflaged Little bustards too, which didn’t reveal themselves either. 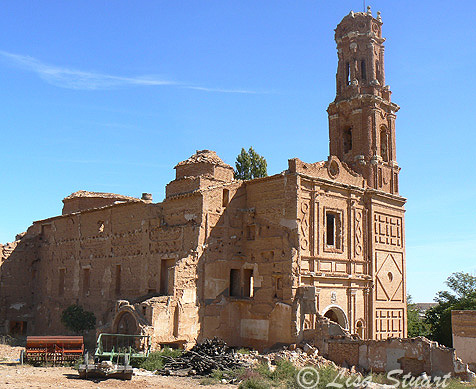 A slight detour led us to the eerily preserved old town of Belchite. Bombed almost to smithereens during the Spanish civil war, the bricks left standing have been kept as a reminder of the destruction although the site is not completely deserted, some buildings being re-cycled as barns for a few sheep and goats. We were hoping for Blue rock thrush here. In their place we encountered House sparrows imitating them and Spotless starlings doing a good impression of Golden oriole.
A short climb from Belchite up to a tiny sierra of ploughed white fields, we stopped in a sheltered butterfly haven near Puebla de Albortón accompanied by Stonechats and warblers. Graylings, Clouded yellows and a myriad blues were enjoying the residual heat of the autumn sun in the purple haze of sea lavenders next to an old railway line, the old walls of which were inhabited by at least one gecko too nervous to let on whether it was Turkish or Moorish.

Back on track towards home T took me to the Bardenas Reales, just over the border into Navarra, halfway between Zaragoza and Logroño. Compared to the pseudosteppes of the Monegros there’s nothing delicate about these in-your-face gypsum beige and sandstone red stratum of drastically eroded hill monsters. Like demanding children, they seemed to be calling “Take a picture of me!” 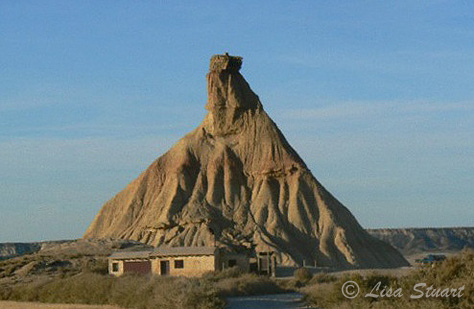 Miraculously there are small, reed-fringed lagoons punctuating the spaghetti-western desert landscape. We were investigating one of these when a distant tinkling of bells caught my attention. A cloud of dust on the horizon was moving inexorably towards us. Sheep. And not a small flock either. We were about to be trampled by nigh on a couple of thousand thirsty beasts. I moved to the relative safety of a metre-high knoll and, taking a deep breath, let the scene unfold with no idea of T’s whereabouts apart from knowing that she was somewhere between the reeds and the water. The sheep, mixed with some large-horned goats, just kept on coming. 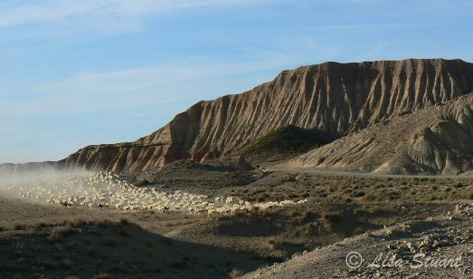 In the lead were two smallish dogs. Almost as unnerving as the herd itself was the knowledge that, guarding it there would be, how many mastines?? Sure enough, trotting alongside the livestock, just visible through the dust, there was one. Passing me by, the young dog submissively dropped his body expectantly like a young wolf greeting an elder, giving T’s position away. The shepherd brought up the rear, a lamb dangling upside down from his hand was allowed its own drink from the vigilant mother. It took forever for them all to quench their collective thirst, and even then they can’t all have drunk. Slowly they moved off to where-ever they were going to spend the night, shadows lengthening across the plain. An age-old scene I felt privileged to have witnessed.
Still buzzing, it was our turn to find a refuge for the night. First though it was just a quick hop to check out the next day’s setting, the Laguna de Pitillas which according to the book is Navarra’s most important wetland. 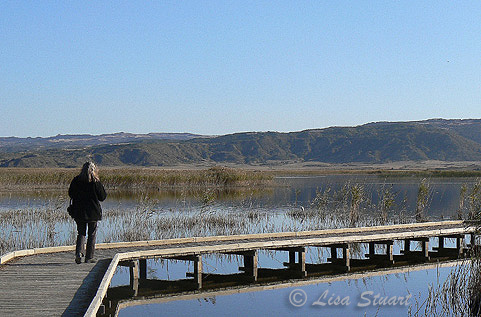 On our way, in the village of Traibuenas, we were surprised to see a couple of White storks still on a nest. Had they missed the migration boat? The sun set as we witnessed egrets flying in to roost, bats beginning their night’s hunting and a solitary rabbit heading for bed. We searched the nearby towns for suitable beds for ourselves. Some hours later we returned to the lagoon to, don’t tell anyone, camp. Once settled in our bags we needn’t have bothered stemming the flow of ghost stories as a banshee-like screech startled us very close by. My first thought was a wader as they are sometimes very loud but this didn’t have a bird-like quality, it seemed almost feline to me. The scream appeared to echo around the lake, or was there another creature answering on the other side? Or was the same creature moving that fast, screeching as it went? I’ve since tried to find out what Western polecats sound like but have come to the conclusion that T had it right with vixen. Still, we slept. 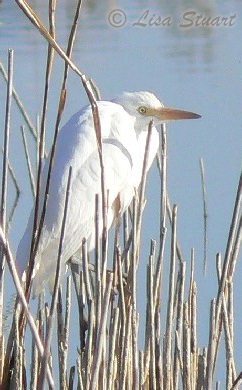 Dawn and a couple of coffees later, we identified the egrets of the evening as Cattle, lots of them. Great whites, Grey herons and many Cormorants too with the ever-present Marsh harriers. Two medium-sized owls flew by and we both saw dark heads and white rumps on both as they headed towards some distant woods. These are a mystery. They definitely had the outline of flat faces of owl but on consulting an expert and looking in field guides, we still can’t identify these raptors. Taking a stroll along the lakeside we found birds I had long wanted to see, Bearded tits (or reedlings as they’re now known), the small flock of which annoyingly moved a little further on with each slow approach. Never mind, I caught the salmon pink/beige flush of the breasts and the black droopy sideburns on their faces before they scarpered on to the next clump of reeds. T heard Water rail. The dominant butterfly species on the surrounding edges of the cultivated land was Green-veined white, along with Bath whites and Clouded yellows. A lone Iberian hare, Lepus granatensis, watched us briefly before hightailing it into the cover of a nearby vineyard.
It was our last day so we had to move nearer to home. On the motorway, AP68, just north-west of Calahorra, I counted 40+ Griffon vultures riding the thermals. My mind returned to the sheep of the day before.
Very close now to the Cantabrian border, we just had time for a final stop at the Hoyos del Tozo, back in a familiar limestone landscape. We left the car at the entrance to a wind tunnel of a small gorge. While studying a battered Queen of Spain fritillary we heard a dreadful noise that sounded like something dying an extremely painful death. Heading, not with a little trepidation, further into the gorge the wailing continued. I scanned some trees just off the road but the noise was coming from higher up. T had found the culprit and was pointing up the cliff to where a young Griffon was lying spreadeagled at the entrance to a small cave. After a while it stood up and carried on with the noise. The only problem we could see was its possible annoyance with two other birds that were perched quietly nearby. Teenagers! Thoughts of bears killing deer dispelled, we headed home.
A day of noisy wildlife (that I wished now I’d had the presence of mind to record) drew to a close as did six wonderful days that I’ll never forget. We’re already planning our next excursion, Villafafila and the Sierra de la Culebra. Expect a trip report from the Balearics!