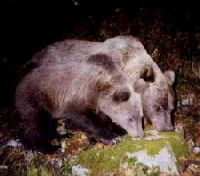 Even better news is expected for their 2010 count with pre-release provisional figures of 25 females with 50 cubs in the western. Will the eastern population give us just one more female though?

Below are their graphs showing the censuses from 1989 (when these systematic counts were started) to 2009. Click on the images to enlarge them.

The methods used for counting females with cubs of the year and the reasoning behind them was published in Bear Biology in the paper, "Trends in number and distribution of brown bear females with cubs-of-the-year in the Cantabrian Mountains, Spain",  Guillermo Palomero, Fernando Ballesteros, Carlos Nores, Juan Carlos Blanco, Juan Herrero and Alicia García-Serrano  available to download in pdf here.

See also the results of another study conducted and the Brown Bear Foundation's results here.