Last Thursday the 7th of April Elías Suárez, a warden working for the Fundación Oso Pardo, was out on a routine patrol looking for signs of bear in the Fuentes del Narcea, Degaña and Ibias Natural Park, Asturias.

He noticed a bear moving strangely in the bush so he moved closer to have a better look.  The second-year female had a deep wound on her haunch, apparently caused by a larger animal. 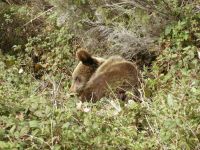 During the second year of young bears' lives they are driven from their mother's territory to find their own. Females will usually set up camp bordering their mother's, a term known as philopatry, while young males will generally have to look further. This young bear's injuries could have been caused, I guess, either by an adult female seeing her off her territory or an adult male bear. These last will kill yearling cubs in order to bring their mother back into season (infanticide) and mate with her themselves but this young bear is in her second year so I don't know if that could be the case here. I also don't know if a wolf attack has been discounted.

The bear was nervous as Elías approached so he tried to calm her talking quietly "It's O.K. I'm going to help you". He called the rest of the patrol and a team from the NGO for help .

This picture from the Asturian Ministry for the Environment shows the sedated bear and the team, including vets and members of Seprona, the wildlife protection unit of the Guardia Civíl, before she was moved to a veterinary clinic in Oviedo where she is now being treated before hopefully being reintroduced back into the wild.

She has been named Lara after the nearest village to where she was discovered, Larón, and is around 16 months old.

Word in the area has it that last autumn nearby in the vicinity of Degaña a female known to have had two cubs that year mysteriously disappeared. This poor thing certainly doesn't look as if she's spent the winter denning and feeding from her mother.............

News from La Nueva España, and a video of the events here on the Brown Bear Foundation's website.

Here's another video from Spanish news