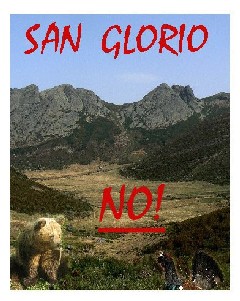 In 2006 I first became aware that what I'd believed to be a ridiculous rumour was, in fact, a very real possibility. Promotors had found a construction company prepared to build another ski resort in the Cantabrian mountains even though the existing three run at a loss. Incensed by the lack of foresight of this project, and the willingness of the local populace to back it, I started an online petition to garner support for opposing the barbaric and arrogant attitude of people that believe that this land is theirs to destroy. Anyone who has seen a ski resort in summer can testify to the ugliness of ski lifts, pylons and pistes without the covering of snow.

"The project for a ski resort in the mountains of Leon, Palencia and Cantabria (San Glorio) is still being stalled by environmental reports and conservation groups. Apart from the destruction of these mountains with all the building, piste-making, huge car parks, etc. and the contamination of soil and rivers with artificial snow-making, the project would mean the end of the Iberian brown bear in these territories by removing a very important corridor of access between the two surviving population pockets. The majority of the local population are under the impression that the project will bring hordes of piste skiers to their region whereas the reality is that these mountains are relatively low compared to the Pyrenees and the Alps, with uncertain snow conditions and high winds."

Here I try to make sense of the sorry saga and keep up to date with the latest developments.

Imagine a poor rural community ekeing out an existence from subsistence farming and living off the land and all that it provides. Now add the tourism boom that Spain enjoyed in the latter half of the twentieth century. What other recourse could the mountains provide to boost the impoverished economy of these people? Winters were harsher then with snow lying much deeper, according to the locals. A ski resort could halt the rural depopulation, provide work and keep the young at home.

Now imagine a land devastated by diggers, disfigured by chairlifts and pylons, rivers drained, wildlife displaced or, at the worst, made extinct, and a human population disillusioned because the promised ski resort turned out to be a white elephant due to adverse weather conditions and climate change.......

While we're at it, we might as well imagine the government of an autonomous community humiliated and voted out of government due to illegal activities (such as the manipulation of laws created to protect the environment) to satisfy their own greed.......No, you're right. That's just taking wishful thinking to the extreme.

If you who don't know these mountains, here's a short film....

The European Union will have the last word.

Biodiversity 100, San Glorio in the Guardian

Last October the Guardian newspaper started a campaign "to compile a list of 100 tasks for world governments to undertake to tackle the biodiversity crisis,"

For the last seventeen years Luna and Ponderoso have been living in a zoological park in the city of León. The brown bears arrived illegally with no papers though are believed to be of Eurasian origin, and are now looking for a new home. In 2008 "El Coto Escolar" was reported to the authorities by a group that monitors zoos.